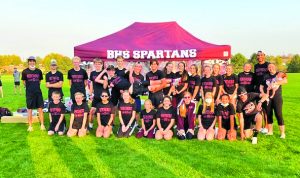 Photo by Kristi Leonard – The BHS boys and girls cross-county team will be making another trip to the 3A state championships this weekend. The Berthoud girls took first place and boys placed second at regionals.

Berthoud High School’s (BHS) boys’ and girls’ cross-country teams are headed to the state meet for the fourth year in a row! Berthoud’s girls won the team title and the boys placed second at the regional meet last Thursday to earn their ticket to the 3A state championships.

Berthoud girls won their first regional team title and Olivia Krueger added another individual victory. She stated, “The course was hard with the smoke today. I expected it to be fast but those girls were tougher than I expected them to be.” Krueger added that she is very happy to have won both the conference and regional championship meets this year after finishing behind her sister, who is now running for the University of Kansas, the past two years. Now it is Olivia’s turn to shine at the state meet. “This determines what heat we are in for state,” Krueger explained.

“I’m excited for sure! I’m hoping it won’t be as hot as today and better air quality.” Krueger replied when asked about the upcoming state meet. “I plan to go out with the leaders and hang on. Sawyer and the other TCA (The Classical Academy) girls, the two Basalt girls, and a few other girls will be in the lead pack,” strategized Krueger for the state meet. Krueger and Jaycee Williams will be in the first wave at state. Williams fought hard to finish in fifth place. Her efforts, which left her pale and exhausted after the race, will enable her to start with the best runners in the state.

Due to COVID-19 restrictions, the state meet will be run differently this year. There are five regions and the top-five places from each regional meet will be in the first wave. The next five will be in the second wave, and so on. Only two individuals and three teams qualified to the meet reducing the number of participants to half of normal years.

Ally Padilla has a bloody shoe to show for her contribution to the team title. Padilla finished in tenth place despite having to suffer through a huge blister on her heal. Senior Ellie Sundheim was twelfth at regionals and has run at state all four of her high school years. Padilla and Sundheim will be in the second wave at state because two girls who finished ahead of them at regionals will be eliminated from state participation.

At first it appeared that Gabriela Hernandez, 37th place, would be the fifth scorer for BHS and the Spartans would get second place. However, Josie Diffendaffer changed the script. Only 25 athletes are allowed in each wave of a race. Diffendaffer’s best time coming into the regional meet forced her to be in the second wave. She led that wave, catching up to and passing girls who started before her. When her time was calculated into the team scoring, Diffendaffer placed 24th giving Berthoud the victory over Liberty Common High School with a score of 52 to 56. Frontier Academy secured the third spot with 88 points.

The three senior boys – Nick Williams, Eli Greenslit, and Lane Pirkey were in wave 1 together. “Experience on the course got them through. They kept calm and didn’t panic,” Coach Jordan Jennings complimented. The course is deceptive. As in the girls race where freshman Andie Rasmussen of Eaton was overtaken by Krueger on the second major uphill of the meet, Berthoud’s boys were patient and took advantage of the strength they’ve built all season. The three finished in 14th, 15th and 16th places, respectively.

The three younger members of the boys’ team were in the second wave. All season, freshman Afton Cooper has been finishing within three seconds behind sophomore Wyatt Schmidle. At regionals, Cooper changed his game plan and ran from the front of the second wave. Cooper was the 28th person across the finish line but when times were adjusted for the late start, Cooper moved up to 21st place. “I felt like I was just running, it didn’t feel too hard. I wanted to stay up with the group,” Cooper reflected. “Afton made a huge difference,” noted Jennings. “He’s smooth.”

True to Spartan spirit, BHS had many supporters on the course. Evan Torres, expressed his appreciation to his teammate Jesse Hatton with a simple, “I was tired the last half mile. The plan was to go out easier the first mile and eat up as many people as you can. Jesse really helped by cheering, ‘Come on Evan!’” Torres was the final scorer finishing in 25th place.

When the scores were totaled, Frontier Academy won with 33 points. Berthoud and Liberty Common were tied with 91 points. Ties in cross country are broken by the sixth runner, and Schmidle’s 26th finish secured second place for the Spartans.

The Spartans will race in Colorado Springs at Norris Penrose Event Center at 12:00 and the girls will race at 12:45 on Saturday, Oct. 17.