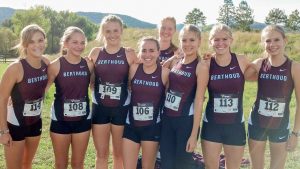 Rain clouds hovered around the Denver Botanical Gardens at Chatfield on Wednesday afternoon as the Berthoud High School cross country team set up the team camp. Shortly before the boys’ race began, a thundercloud approached the area, blowing the Spartans’ tent over and sending athletes running for the busses to get out of the rain and lightning. The storm moved off to the east and the runners started their race preparations once again. Due to the weather, it was decided that the girls would begin their race four minutes after the boys start, to get the races completed before the next storm cloud hit.

Berthoud raced in the open division because of the weather conditions, timing, and the team was not at full strength because of resting seven athletes for next week’s Tri-Valley Conference meet.

Berthoud freshman Ty Williams was the first through the race. The course wound around the Botanical Gardens and through knee-high water with Noah Burtis, William Payne, Eric Rennaker and Jakob Satur running close to one another about 30 seconds behind Williams. Williams finished in 39th place in 20 minutes, 53 seconds, running a personal-best time for the season. Burtis and Kjell Gelde-Bennett also set personal-best times on the 5K course.

Berthoud was not the only team that raced a level down. The lightning delay forced D’Evelyn to put all of their athletes in the open division because their bus had to get back for another trip.

Berthoud’s Josie Spitz was the first runner not from D’Evelyn, as the Denver school swept the first six places. Spitz finished seventh in 22:50. Courtney DeMoudt, Sonya Schuppan, Sara Godfrey, Olivia Eppler and Annika Jessen were close behind as Berthoud placed six runners in the top-20 finishers. With less than a minute between Spitz and Jessen, Berthoud girls’ team placed second.