“We want to get students out to come watch us, especially since we have a home meet,” Berthoud High School (BHS) senior Olivia Krueger said when asked about the team’s goals for the upcoming cross country season. 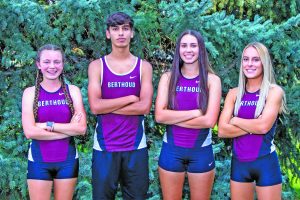 Photo courtesy of Westwind Photography Having fun and building relationships are the key to BHS cross country success as seniors Josie Diffendaffer, Ally Padilla, Olivia Krueger and Derek Rennaker laugh together before a hitting the roads for a tough workout.

There are already plenty of eyes already watching the BHS girls cross country team which is ranked fourth in 3A competition based upon last year’s results by CO.Milesplit.com, an online website for track and cross country results.

Krueger, Ally Padilla and Josie Diffendaffer are the senior captains who will be leading the troupe of runners looking to finish in the top-three at the state meet in October. Krueger, Padilla and sophomore Jaycee Williams have already earned All-State recognition during their short high school careers and the girls team placed seventh in the state rankings last year. However, securing an award for the BHS trophy case is second to enjoying the experience.

When asked about team goals, Padilla responded, “Maintaining relationships, building our support system and getting better at each practice as we are progressing through the season. We want to have a great season together with everyone getting PR’s (personal records). Make the last one a good one!”

Diffendaffer added, “We want to compete well and bond as a team.”

“Syd (Slausen) is definitely going to help us a lot”, mentioned Krueger. Slausen is a freshman who had a great deal of success as a middle school runner. “Her sprinting abilities will knock other peoples’ four, five, six out (of scoring). We can really utilize her,” complimented Padilla.

Of course, one has to mention sophomore Williams, fresh off of All-State showings in both cross country and track last year. “Jaycee learned to race last year and she’ll be even better!” noted Krueger. The new BHS school record holder in the 800-meter and 1600meter races ran a 4:59.47 for the mile at The Outdoor Nationals meet in Eugene, Ore. this summer. Williams will probably not race until September to give her some more training time after the long track season.

“The girls’ team is really good, but I’m really excited for the boys’ team this year,” stated assistant coach Luke Spitz. “We have the deepest boys team. The guys can run with each other. Daniel (Hatton) will be key. Scott (Clark) is really good. Tate (Bothum) is a workhorse.”

The first meet for the Spartan harriers will be on Aug. 27 at Roosevelt. The home meet, Berthoud Garden City Fall Festival will be on Saturday, Sept. 4. There will be a citizens’ race starting at 8 a.m., followed at 9 a.m. with the high school races and then the middle school races. The course is two miles and the meet is a fundraiser for the team. Entry is currently open by contacting Coach Jennings at Berthoud High or going online to https://runsignup.com/Race/CO/Berthoud/FallFamilyFunRunWalk. There is also a virtual option for those who want to complete the course on their own or in their dreams!