Seniors give it their all at final Max Marr Spartan Classic 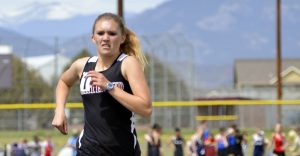 Berthoud’s Kiah Leonard crosses the finish line in the 1,600-meter run at the Max Marr Spartan Classic on April 11 at Berthoud High School; finishing 15 seconds ahead of second place.
John Gardner / The Surveyor

Berthoud track and field fans were treated to a fine show and good food at the Max Marr Invite on Saturday, April 11. One could stand and smell the freshly grilling hamburgers and look at the pictures of the 12 seniors who would be competing at Max Marr stadium for the last time. Olivia Eppler, Ivan Gaitlin, Sebastain Gonzalez, Erick Hernandez, Gage Hope, Kiah Leonard, Lydia Lind, Lexy Seeley, Luke Spitz, Emily Voll, Triple Wadsworth and Michael Woodiel led the Berthoud teams to a strong finish in their final home meet. The girls team finished in second place just 1.5 points behind Eaton, with a score of 114.5 to 113 in the 27-team meet. The boys from Berthoud scored 53 points and placed fourth behind Greeley Central, 84, Broomfield, 63, and Eaton, 59.

“I am so thankful to the parents, fans and the community who support us every year,” commented Head Coach Colby Schultz. “It takes a lot to put on a track meet, and we have lots of people willing to help and cheer on the athletes.”

“It has been a good day for the jumps,” stated Coach Mel Santos when asked about how Berthoud High School’s jumpers competed this week.

Sixteen personal-best results were posted by BHS jumpers in two meets. The most notable was Kristina Cavey, who set a new school record of 5 feet, 3 inches in the high jump. Ties in the high jump are broken by how many misses an athlete has. Cavey and two others cleared 5’3”, but Cavey placed second based upon misses. Sophia Visger also cleared the 5’ barrier. Visger 5’0” and Whitley Porter 4’10” set personal bests but did not place. 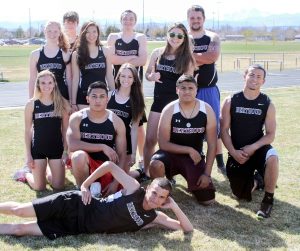 Connor Siruta jumped four inches higher than his previous best for a 12th –place finish at 5’7”, and Taylor Fooks increased his best jump by five inches to 4’11”.

“I was impressed with the quality of the athletes in the meet today. Eleven girls cleared 5’ for the high jump today,” commented Schultz, “And Wyatt Woodrick jumped over 20’ in the long jump.”

Woodrick’s jump was 14 inches further than his previous best, placing him in third. Freshman Trinity Buckley missed scoring in the long jump by one quarter of an inch as he posted his best jump of 18’8.25” for ninth place. Lydia Lind long jumped 15’9” for fifth place and Lexy Seeley jumped a season best in the long jump at 14’3.25”.

Josie Spitz won the pole vault and Kelly Chamberlain placed third, though neither girl jumped their personal-best heights. All totaled, the jump crew of BHS added 46 points to the team totals at the Max Marr meet.

Alyssa Strong and Hannah Langer placed second and eighth at the Don Osse Invitational on Thursday evening with personal-best jumps of 36’5” and 31’4.25” adding to the jumping bonanza at BHS this week. Strong placed second at Max Marr, but jumped four inches less than she had earlier in the week.

“The 100-meter hurdles was a highlight today. The girls took the top three spots,” humbly stated hurdle coach, Jeremy Lanter. Alyssa Strong finished in first place with a time of 16.47 seconds, Emily Voll, 17.42, and Chamberlain with a, 17.62, gathered 24 points for their efforts in the 100-hurdle event. Voll and Chamberlain added another nine points for fourth and fifth in the 300 hurdles with times of 50.42 and 51.67, respectively.

Distance runner Kiah Leonard did her part to help the team score, adding another 23 points to the total. The senior won the 1,600 meters by 15 seconds with a time of 5 minutes, 27 seconds, then came from behind in the 800 meters to win that race in 2:30. She was the anchor on the 4 x 400 relay with Jordan Hull, Annika Jessen and Emily Voll coming from behind and just missed catching Skyview High School, placing fifth in the race. The relay team ran the school’s fastest time of the season in 4:28.55.

Luke Spitz ran his signature race, the 3,200 meters, placing second with a time of 10:26. The boys 4 x 800 relay team of Wadsworth, Tyler Markell, Murphy Vogele Zimmerling, and Elijah Grewal set a new standard in the event this season with a second-place finish in 9:07.

The girls 4 x 100 relay team of Lydia Lind, Chamberlain, Catherine Meeker and Sophia Visger moved closer to qualifying for state. The girls improved by over a second (which is a lot for this race). They finished in second place in 50.89 seconds.

The boys 4 x 200 relay team of Jake Rafferty, Woodrick, Woodiel and Logan Johnson improved once again with a fourth-place season best of 1:34.66 seconds. The team continues to refine their handoffs and keeps getting better each week.