To reach the pinnacle in a given sport – to win championships, to break records, to leave an indelible mark on history – takes more than just talent and hard work. A team must have an internal bond; they must be more than ordinary teammates. 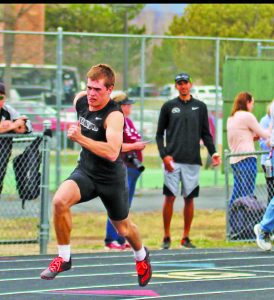 Photo by Tiffany Rafferty – Berthoud’s Jake Rafferty running in a relay race this spring at BHS. All 9 Berthoud relay teams have qualified for this week’s state track meet.

What does it take to break a long-standing school record? What does it take for that record to stand for nearly 20 years? Just ask Chris Medina, Berthoud High School (BHS) class of 2000 graduate, a Berthoud Sports Hall of Famer, and the anchor leg of the still-record holding 4×400-meter relay team.

The answer is the aforementioned off-the-track bond. “Committed girls or guys, committed to practice, because we were committed to the workouts, and as it went along we became committed to each other,” Medina said as he explained how he and his three relay teammates – Odie Kroog, Jeremy Lanter and Rajmon Williams – had that bond that extended beyond the track. To this day, when one of the group sees another they still hold up fingers, one, two, three or four, corresponding to their slot on their record-holding relay team.

“The more we sweat and run together in practice, the harder our workouts were, the easier it was in the halls to relate to each other, and that spawned us hanging out,” Media explained. “That in turn helped us work even harder; I think they both fed into each other, it reinforced it.”

Fast forward to 2018 and BHS athletes are still setting and breaking school records and will be aiming to bring home championships in this week’s state track meet. All nine relay teams, from the boys and girls sides, will be competing at the state meet at Jeffco Stadium, a first for the school. And all nine have a legitimate chance to bring home some hardware.

The role friendship plays in success in sports has stood the test of time. Berthoud’s current 4×200 boys relay team – Trinity Buckley, Jake Rafferty, Ryan Schmad and Brock Voth – who broke the school record a couple weeks ago, are aiming to do it again, and spoke eloquently about the role their friendship has played in their success.

Asked about their off-track bond, Schmad said, “I would say it helps loads, like 10-fold. Not only are we teammates out here, but we’re friends, and when you know the guy you’re handing the baton off to or running with, it really, really helps.”

Connor Siruta, who runs on the 4×100 and 4×400 relay teams, summed up the importance of friendship perfectly by saying, “It’s the chemistry aspect of it. We’re all close, and that friendship makes it easier to want to work and want to do well with these guys. Since you have a personal relationship you want to see them do well and they want to see you do well, so it just helps uplift everything.”

Spring weather in Colorado is often fickle; track meets and track practices can be held one day in sweltering temperatures, the next day in drizzle and gale-force winds. Rafferty explained the group’s friendships make the rigors of practices and competitions easier. As the senior explained, “Being friends with these guys, being friends with them for so long, it’s just so much fun and you can’t beat having fun with these guys. Running with them in track is just so much fun because we’re not like any other track team out there.”

Breaking a record in a race requires minute adjustments and improvements to shave off tenths or even hundredths of seconds, as Voth explained. Trust goes an awfully long way toward reaching those ends, “On the teamwork aspect, you’ve got to make sure your steps are perfect. You’ve got to take off at the right point, and there is so much trust that goes into that.”

Head Coach Colby Shultz noted the importance of the trust factor, saying, “They trust each other more than anything. They’ve been together since they were sophomores as varsity relay, and that first year was pretty rough. They got thrown into the fire, but all along they kept working hard and trusting each other that it’s worked out really well for them.”

All four young men mentioned, while breaking one record did provide a sense of accomplishment, it also fed their desire to break more records, something that is no doubt shared by all nine Spartan relay teams. As Schultz said, “They can definitely go out and do it … we know on both the guys and girls side we can contend for team titles, and we can win a lot of induvial events.”

Come rain, wind or sun, the state track meet will be held at Jeffco Stadium in Lakewood May 17-19.