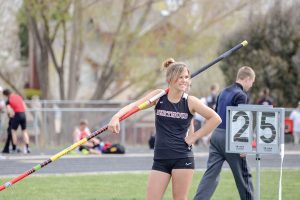 One of the marvelous things about track and field is that athletes from sports as disparate as volleyball to wrestling and basketball to softball can fine-tune their physical prowess in one, or several, of the various running, jumping or throwing events the sport offers.

Even if their true passion lies on the gridiron, the diamond, the hardwood or the mat, Berthoud High School (BHS) head track and field coach, Colby Schultz, is more than eager to welcome athletes of all stripes to his team.

“It’s all about being a salesman,” said Schultz, a BHS graduate, member of the science faculty, and former standout athlete who also serves as an assistant coach for the Spartan football team. “We can convince them that track is going to make them better at anything they do … it’s going to push them to be better at their other sports.”

And succeed in doing that, Schultz and his staff have.

This season’s track and field team will feature, among many others, Berthoud’s All-Conference volleyball player Jessa Megenardt, who will compete in both the triple and long jumps. Basketball superstar and Fresno State commit Kristina Cavey will compete in the high jump once again and this year has added some distance events to her repertoire. “It’s fun to see these kids want to step up and do something for us,” Schultz said.

Two-time state wrestling champion and soon-to-be college football player Chad Ellis will compete on some relay teams and as a thrower in the field events. “Chad’s the guy who will do anything we ask, he’s such a great athlete,” Schultz said.

Steele Castles, who will play football for Morningside College in Iowa, and his younger brother McCallan Castles – a top-drawer football and basketball player – will be on relay teams together that led Schultz to say, only half-kiddingly, “On their handoff you can probably add seven yards just because of their wingspan.”

Berthoud sophomore Jake Rafferty, who Schultz said, “is probably the fastest kid we have overall,” helps anchor a sophomore class of athletes that has an excited Schultz saying, “I’m really excited about the boys team this year … this group of sophomores can really step up this year.”

Senior football players Max Bump and Jamie Gray, the latter of whom will play football for Black Hills State next fall, will feature prominently for the Berthoud boys team in the throwing events. Schultz commented he has already offered Bump a coaching job for next year because, “He just gets it, he’s such a leader.”

On the girls’ side − where the Lady Spartans will go for their fourth straight conference title − Berthoud will be anchored by three athletes for whom track and field is their primary sport. And all three − Kelly Chamberlain, Alyssa Strong and Josie Spitz – have already committed to compete collegiately.

“Those girls are such anchors for us; all bring such a positive attitude,” Schultz said. “We always go into the season looking for that conference championship. It’s become a tradition for us and they’re going to be a big, big part of it again this year.”

“The biggest thing, and its’ been fun because we’re all so into this, but the message is just to every day get better,” Schultz said. “And if they all continue to work well as they have thus far this is really going to be a great year for us.”