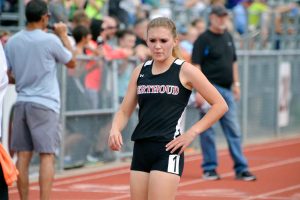 Kiah Leonard catches her breath after running the 3,200 meters at the Tri-Valley Conference Championships on May 2 at Longmont High School. Leonard dominated the competition in the race, besting second place by 35 seconds.
John Gardner / The Surveyor

Berthoud’s long-distance phenom Kiah Leonard is a competitor. As a long-distance runner, the Berthoud High School senior may not get the chance too often, but she enjoys a good race to the finish.

“It’s really nice to have competition because it gives you something to shoot for,” Leonard said after racing to a second-place finish in the 800-meters at the Tri-Valley Conference Regional Track and Field Championships at Longmont High School on May 1-2.

Leonard had an exceptional weekend, racing in four events and placing inside the top three in all of them. Her performance was a phenomenal exhibition that punctuated the senior’s high-school career. But the always humble Leonard was happier about helping her team win its third consecutive Tri-Valley Conference Championship than any of the personal achievements that day.

“It’s really cool to be able to come out and win for the team and to know that my points are contributing to the team,” Leonard said.

She started the meet running her favorite race — the 1,600 meters — on Friday. Not only did Leonard win the event by 19-and-a-half seconds, with a time of 5 minutes, 20 seconds, but she also broke her previous meet record in the event by more than five seconds.

“I was kind of hoping for a faster time — as far as state qualifications go — so I was a little disappointed,” she said, showing her competitive nature. “But I’m still thrilled about it considering the rain delay and running by myself. I still would have liked to run a faster time.”

Running by herself, she said, because she was all alone for most of the race. After all, Leonard is still a competitor.

On Saturday, Leonard started the day running the 3,200 meters, which was postponed from Friday due to weather. The senior again cruised to a win with a time of 12 minutes, 16 seconds, winning the event for the third year in a row. Her closest competition was Skyline’s Sydney Richards who finished 35 second behind Leonard.

“We’ve raced against each other all four years,” Leonard said of Richards. “I know her pretty well.” 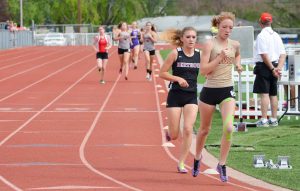 Kiah Leonard paces herself behind Skyline’s Sydney Richards in the 3,200 meters on May 2.
John Gardner / The Surveyor

Leonard followed closely behind Richards for the first five laps before passing her. On the sixth lap, Leonard made her move and never looked back.

“I felt pretty relaxed in the beginning and then — with about two laps to go — I picked up the pace to secure the win and pick up points for my team,” Leonard said.

Leonard’s competition heated up in the 800 meters where she finished in second place, with a time of 2:28.57, behind Holy Family freshman Isabelle Hren, who clocked a 2:25.60.

The race, for Leonard, was really for second place, as Erie freshman Alia Brand pressured Leonard in the last 200 meters. Leonard held on to take second by one-one hundredth of a second. It was her favorite race of the day, she said.

But always one for competition, the challenge didn’t threaten her; it excited her.

“It’s always fun to be sprinting for it at the end,” she said.

Competition isn’t something new for Leonard. In her four years at BHS running in cross country in the fall and track and field in the spring, she’s racked up quite a resume; a resume that will lead her to the University of Wyoming next fall.

Along with contributing to a three-time league championship team, some of Leonard’s most notable achievements include being a four-year varsity letterman in cross country and track and field as well as academically where she has over a 4.0-grade-point average and will graduate with STEM and academic honors this year. She’s holds school records in the 1,600 meters, 3,200 meters, 5k and 4×800 relay. She holds the Tri-Valley Conference meet record in the 1,600, setting records in 2014 and 2015.

Leonard’s also a three-time 4A Tri-Valley cross country champion, receiving All-Conference honors three years running. She’s won the Tri-Valley Conference titles eight times in track and field; all three years in the 1,600 and 3,200 meters, and the 4×800 in 2013 and the 800 meters in 2014. She finished in second place in only three conference events during her career. Her third-place finish in the 4×400 this year was a first for Leonard. 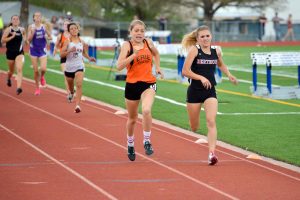 Kiah Leonard races to a photo finish in the 800 meters against Erie’s Alia Brand. Leonard held off Brand for second place.
John Gardner / The Surveyor

In her junior year, Leonard was named the Tri-Valley Athlete of the Year in both cross country and track and field; an honor that she’s been nominated for again this year in track and field.

It’s that resume, her determination, her dedication to her team and the sport of running that track and field Head Coach Colby Schultz said is going to leave a huge void next year.

“We’re going to miss her a lot. She brings it every single day,” Schultz said. “She really comes out and epitomizes what you want in a teammate. She knows that conference isn’t about anybody, it’s about the team. She loads up and just does what she has to do; and it’s really valuable to have an athlete like that.”

After a short break Saturday, Leonard ran the third leg in the 4×400-meter relay with Catherine Meeker, Ashlyn Fahrenbruch and Emily Voll. The team finished in third place behind Roosevelt and Holy Family, but the top-three finish helped the ladies secure a third straight conference championship. And helping her team win that title again was the highlight for Leonard.

“It’s something that we’ve all really worked hard for and it’s a goal that we all had starting back at the beginning of the season — wanting to win conference,” Leonard said of the three-peat. “So it’s cool to have it all come together.”