This week marked the end of the season for the Berthoud track team, with the Colorado State Track meet in Lakewood. The athletes ended with a bang, placing on the podium in most events and the BHS girls placed third in the team competition. 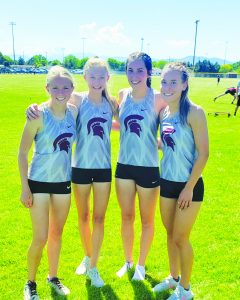 The girls’ 4×800 meter was a cutthroat battle to the end between Berthoud and D’Evelyn. It was clear that these girls gave it their all, using their strategy, hard work and determination to not only win the race but also set a new school record. Olivia Krueger (2:21) started the relay handing off the baton in second place. Two teams passed Ally Padilla (2:28) but Ally maintained contact. Jaycee Williams (2:17) caught all of the competitors on her first lap moving into first place. The runner from D’Evelyn was able to stay close for most of the two laps but Williams accelerated around the final curve, giving Berthoud a 30-meter lead. Williams handed off to Paige Farnam (2:19) who started lapping other teams. After her first lap, the D’Evelyn runner caught up and passed Farnam. However, the BHS freshman found another gear and sprinted to victory winning the state championship.

When it came to the individual events, the Berthoud team did not disappoint. Freshmen Darin Davidson competed in the boy’s triple jump, scoring as one of the few freshmen in the event. Although he didn’t podium this year, he gained valuable experience for the future.

On the girls’ side, there were some great performances. Paige Farnham placed second in the long jump (17’3.5”) and fourth in the 400-meter dash (57.70). Jaycee Williams was just edged out for the victory in the 800-meter run (2:15) with her teammate Olivia Krueger placing fifth (2:18). This duo also ran well in the 1,600 meter, Jaycee placed fourth (5:07), followed quickly by Olivia Krueger in fifth (5:08). Last week, Krueger broke Kiah Leonard’s seven-year-old school record in the 1600. She held it for a week as Williams broke Krueger’s record at state. 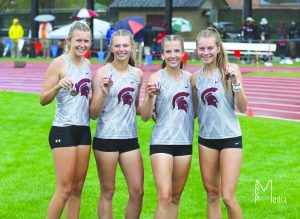 Altogether, the state meet proved to be a great way to end the season. Berthoud only loses one state competitor, senior Nick Williams. We cannot wait to see what these athletes do in the coming years.