More school records were broken this week as the Berthoud High School (BHS) track team heads into the state meet later this week. Tate Bothun broke one of the oldest records on the board in the boys’ 1,600 meter run with a time of 4:31. The previous record of 4:32.70 was set in 1981 by S. Hartley. Bothun broke the record at the Randall Hess Invite last Saturday. His race strategy was to follow Caden Schweer of Severance who was also going for a record setting time for his school. Bothun kept close to Schweer and then accelerated on the final lap, closing in one of his fastest finishes ever. Bothun left Schweer far behind and almost caught Joe Houdeshell of Poudre High for the win. Although he placed second, Bothun was elated. His previous best was 4:45. 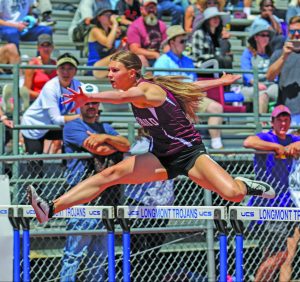 Photo by ACP Media – Berthoud senior Anndee Davidson clears a hurdle at a meet earlier this season. Davidson is one of 25 Spartans who will compete at the state meet this weekend but Davidson stands out as she qualified in four events – 100- and 300-meter hurdles, long jump and triple jump.

Not new to setting BHS records, Olivia Krueger took down Kiah Leonard’s 3,200-meter record of 11:24.6 from 2015. Krueger set the new record of 11:18.20 at the St. Vrain Invite held last Friday morning. Slated to race in the evening with the top runners, Krueger switched to the morning race because of a prior commitment. She did not have much competition but was able to focus on her splits and literally run away from the other girls.

Jaycee Williams reset her 1,600-meter record. Williams was racing with the best runners from the area. “Jaycee ran a gutsy race. This state is really strong in the distances. The Valor girl (Keeghan Edwards) and (Isabel) Allori (of Liberty Common) took it out hard and Jaycee hung with her. Jaycee wanted to break five (minutes) but barely missed it,” explained Coach Jordan Jennings. Williams’ time was 5:00.49. After setting their records on Friday, Williams and Krueger paced teammates Josie Diffendaffer and Sydney Slauson in the 800 meters on Saturday. The two raced then raced for the line in the final 200 with Williams winning the race. Diffendaffer ran a personal best time of 2:25.

There were a number of other personal best times and distances between the two meets. Freshman Brooke Nelson ran 17.29 in the 100 hurdles on Friday. The time would have qualified the freshman for the state meet but the wind was too strong and her time would not count. So, Nelsen had to race the event again on Saturday. Her non-wind-aided time of 17.42 was good enough to earn her a spot in state meet, which starts this Thursday.

The boys 4×400 relay has not been one of the state’s top teams all season. However, Jayden Nohr, Wyatt Schmidle, Jay Michaelis and Derek Rennaker combined their talents to win their heat and rank them 13th in the state.

Anndee Davidson improved upon her previous 100 hurdle time, as did Kara Wilson. Myla Williams found that her best event may be the 400 meters, as she won her heat. Uriah Chacon ran his best time in the 110 hurdles and 300 hurdles. Jay Michaelis improved upon his best time in the 110 hurdles. Julian Rayon (3,200) and Jack Wingard (pole vault) improved on their best marks. The girls 4×100 relay team of, Sydney Hardy, Addy Kirkpatrick, Madison Kenner and Ellie Harper improved their season best time. The boys 4×200 relay team of Nohr, Braeden Moore, Michaelis and Kam Hosier bettered their fastest time of the season at St. Vrain.