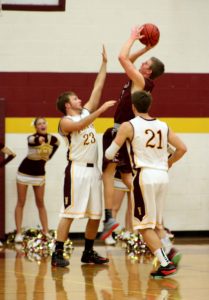 Berthoud’s Cody Braesch goes up for a shot during the boys’ game against the Windsor Wizards on Jan. 17.
Angie Purdy / The Surveyor

At this point in time, after suffering their fifth-straight loss Tuesday night to Frederick, the Berthoud High School (BHS) boys basketball team appears to be in the latter category.

The Spartans have size and speed, drive and determination, and they hustle and want to win as badly as any team out there. They just have not yet put together a complete game from a mental standpoint, as evidenced by a 15-point loss, 59-44, on their home hardwood to a heretofore one-win Warriors’ squad.

“Before this game, Frederick was 1-12 but they could be the best 1-12 team in the state,” said Berthoud’s Cody Braesch. “You’ve got to come out in every game, against every opponent, thinking you have to play your best to beat this team. I think we just kind of came out with the wrong mentality.”

“Our mental toughness just isn’t there,” Urrutia said. “We make a mistake; we just shut down. We let too much affect our game.”

The Spartans got off on the wrong foot, even before the game had started, when the team failed to get its official roster and scorebook turned in to the officials 10 minutes before tipoff deadline. The mistake resulted in a technical foul.

Once play began, Berthoud watched Frederick jump out to an early 7-0 run, thanks to a pair of treys from Warriors senior Jacob Oster and Lane Hiser. Things just seemed to snowball from there for Berthoud, as the Spartans shot a paltry two-of-13 from the floor and were out-rebounded 13-6 in the opening frame.

Urrutia took responsibility for the scorebook snafu and his team’s sloppy play early.

“We came out flat, some of that is my fault with the scorebook,” Urrutia said. “But I tell the guys we cannot play down to our competition. Now, I think they are better than 1-12, but just because they’re 1-12 doesn’t mean we’re going to run all over them.”

Three more from downtown in the second period, coupled with five Berthoud turnovers and another two-for-13 shooting effort, had Frederick with a commanding 27-16 lead at halftime. The Spartans were able to stage a rally in the second half, with Braesch and freshman Cally Castles working the boards, pulling down a combined 11 rebounds in the second half, preventing the Warriors from getting second-chance scoring opportunities.

The Spartans cut the Warriors lead down to just five, 39-34, in the opening seconds of the fourth period when junior Patrick Barron drained a shot from beyond the arc. However, the Warriors quickly re-established their control of the game, sinking threes of their own on back-to-back possessions as part of a 12-3 run that put visitors up 49-34 and erasing whatever momentum Berthoud was able to generate.

“They were shooting great there, but I think we kind of let a little bit of their momentum kill some of our momentum,” Braesch explained after the game. “It’s hard, it’s frustrating, but it just means we have to step up and play better defense. We can’t let it affect us mentally; we just have to keep playing the best we can.”

Frederick made good on eight of nine shot attempts in the fourth period, squashing any attempt Berthoud could have had to come back in the game.

With seemingly every Warriors’ shot attempt finding the bottom of the net, Berthoud got away from running its offense, as several players, assuredly with the best of intentions, took ill-advised shots, trying to get Berthoud back in the game on their own. It was not a recipe for success as Frederick out-scored Berthoud 22-13 in the final frame to cruise to the 15-point win, 59-44.

As disappointing as the loss to the bottom-dwelling Warriors was, last Friday the Spartans went toe-to-toe, at least for a half, with the Tri-Valley Conference powerhouse Windsor Wizards. Playing on the road, Berthoud found themselves down only two, 31-29, at halftime. At one point the Spartans were up by 11 but allowed Windsor to assemble a 9-0 run and eventually take the lead before the break. Despite 15 points from Nate Hammel and winning the rebound battle 31-27, Berthoud let the game get away in the second half, ultimately falling by a 68-48 final tally.