Berthoud High School (BHS) boys basketball coach, Mike Burkett, has seen his players put in countless hours of work dating back to the summer, absorb all the concepts he and his staff have worked to install, and have rounded into form as the season has progressed. 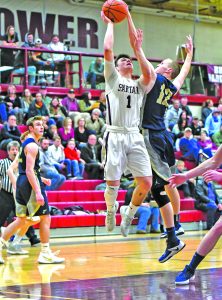 Photo by Lance Elmore, Blink Photography – Berthoud’s Jake Lozinski goes up for a shot against Frederick last Friday at BHS Lozinski led the Spartans in points (22) and rebounds (10) as Berthoud won by a 76-66 final.

The Spartans dribble-drive offense has begun to operate precisely as it was conceived, so much so it leaves Burkett wishing the team had four or five weeks left of the season instead of just one. Berthoud made good on 11 three-pointers last Friday night, most of which came from the corners on the baseline, as they defeated Tri-Valley Conference rival Frederick by a 76-66 final to keep their postseason hopes alive.

“We’ve been working on that since the summer. With the dribble-drive offense we run you got to have some kids who can shoot the ball from the corner,” Burkett explained. “If you’re going to run dribble-drive and open those lanes, they have to respect those shooters in the corner. That’s the product of just months and months of hard work.”

Berthoud was less than crisp on the defensive end of the floor in the opening quarter of the game, allowing Fredrick to pour in 20 points in the eight-minute frame, a total Burkett told his team was too much. A three-pointer from junior Cameron Poll in the final 20 seconds of the period put Berthoud down just two, 20-18, at quarter’s end.

The Spartans tightened up their defense and allowed the Warriors to score only five points in the second frame to take a 33-25 lead into the break at halftime. “I think overall we were lazy in the first quarter, in the second quarter we stepped up, we were in help, took away the drives and we just did what we needed to do,” Ben Burkett said after the game.

“That was a big quarter for us and we talked about that at halftime,” Coach Burkett said. “These last few games we haven’t defended very well, and that’s what’s cost us. We haven’t got those key stops, those key rebounds, and tonight we did a lot better job of that from the second quarter on. That’s a big key in the game.”

Berthoud’s defense kept up their end of the bargain in the second half, while the dribble-drive offense began running like a well-oiled machine. Ben and Jake Lozinski each made a pair of three-pointers in the third period, and Poll added another as Berthoud took a comfortable 51-36 lead with 2:15 remaining in the period.

Even though he is one of the tallest players on the team, Ben explained he’s more comfortable playing outside than he is in the post. The offensive approach Berthoud employs allows Ben, as well as Poll, Lozinski and others, to take position on the corners of the court. When Curtis Peacock and Wyatt Stratmeyer attack the basket and get the defense to collapse, it allows for open looks at three-pointers on the outside.

“I’ve been working on it since the summer, I’ve been in the gym pretty much every day shooting, it helps a lot,” said Ben, who made four from downtown to the finish the night with 17 points. “In the summer we ran the same dribble-drive we’re running now … on the drives I would go out to the corner, and I got used to those shots and I like them.”

Lozinski made another from three-point range in the fourth quarter and was a perfect four-for-four from the foul line, as the junior turned in a stellar performance on the night, leading the Spartans with 22 points and 10 rebounds. The Warriors made an effort at a comeback and scored 25 points in the final quarter, but Berthoud’s dominance on both ends of the floor in the second and third quarters made the hill too steep for Fredrick to climb.

The Spartans welcomed always-tough Windsor to the BHS gym on Tuesday night but found themselves on the losing end of a 76-45 final score. Berthoud started off very well and held a 13-9 lead after the opening quarter, but things went sideways for the Spartans after that. The Wizards scored 25 in the second quarter and 26 in the third, to pull away. Peacock scored a team-high 17 for Berthoud but was the only Spartan to reach double-digits in what was Berthoud’s lowest offensive output of the season.