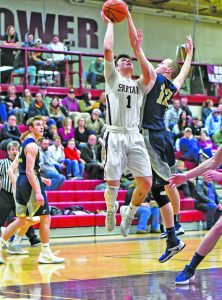 File photo – Berthoud’s Jake Lozinski goes up for a shot in a game at BHS last year. The Spartans notched a win over Erie on Saturday but dropped their other two conference games in the last week to Holy Family and Roosevelt.

What was perhaps the biggest positive to come out of the win in Erie was the fact Berthoud rallied from a six-point halftime deficit, 32-26 to win the game by the 16-point margin, thanks to a torrid second half. The third quarter has been a trouble spot for Berthoud throughout the season, but against Erie the Spartans exorcised those demons. Berthoud hung 20 on the board in the third quarter and another 23 in the fourth, more in each than Erie was able to muster in the entire second half.

Berthoud saw five players hit double digits in scoring, with Ben Burkett and Curtis Peacock each scoring 15, Jake Lozinski adding 13, and junior Cooper Stratmeyer pouring in 10 more. Berthoud also killed it off the glass, out-rebounding the Tigers 40-21, with Brent Hoogland pulling down 10 boards and Lozinski recording another 10 to finish the night with a double-double. Winning the rebound battle by such a large margin had to please Berthoud Head Coach Mike Burkett, who has been stressing that aspect of the game all season long. The Spartans also shot an impressive 51 percent from the floor and added 20 points from the free-throw line.

The momentum generated from the win on the road in Erie did not, unfortunately from their perspective, carry over against Holy Family. The always-tough Tigers built an early lead and Berthoud was unable to catch up. Holy Family out-scored Berthoud 17-9 in the first quarter and 16-7 in the second to take a commanding 33-16 lead in to the locker room at halftime.

Berthoud did their best to battle in the second half, scoring at a better clip than in the first 16 minutes of play, but the Tigers kept their lead at a comfortable margin throughout. Ben Burkett finished the game with a team-best 14 points, making good on four of eight from three-point range and also paced the Spartans with nine rebounds. Peacock added another 11 points for Berthoud.

Burkett’s play of late has given the Berthoud offense a major boost. The senior admitted his play in the first half of the season, before the two-plus-week-long holiday break, was not up to his standards. Faced with having only a handful of games left in his high school basketball career, he has turned it on and has played at an All-Conference level over the last two weeks.

In the five games since Christmas break, Burkett has scored an average of 15.6 points per game and has made 17 from beyond the arc. The offensive boost he has provided the Spartans has taken some pressure off of Peacock and Lozinski, who did the majority of the scoring for Berthoud in the opening month of the season. Furthermore, having another offensive weapon on the floor, especially one who can shoot from long range, will provide a big boost for the Spartans as they navigate a brutal TVC schedule with the aim of making the state playoffs for the first time in years.