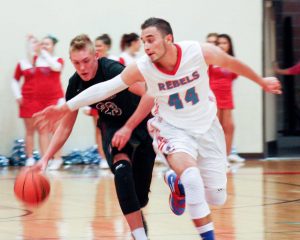 Berthoud’s McCallan Castles charges past a Weld Central defender during the boy’s season opener on Dec. 1 in Keensburg. The boys started the season with a win, 49-40.
Angie Purdy / The Surveyor

It’s always helpful to get off to a good start, and the Berthoud High School (BHS) boys basketball team started the 2014-15 season off the right way – with a win. The Spartans topped the Weld Central Rebels by a 49-40 final score Monday night in Keenesburg.

The Spartans not only began the season in strong fashion with the win, they began their season-opening game strongly by out-scoring Weld Central 26-14 in the first half. The Rebels gave Berthoud all they could handle, however, ending the game on a 21-8 run and almost stole the game from the visiting Spartans.

“In the first, second and third quarters we were really great; in the fourth quarter we laid an egg,” said Berthoud Head Coach Anthony Urrutia.

It was Urrutia’s first game, and first win, as the Spartans head coach.

The first reason Urrutia cited for Weld Central’s fourth-quarter surge was the fact that Berthoud’s Nate Hammel fouled out with six minutes remaining in the game.

“[Hammel] sets the tone for us on defense,” Urrutia said. “He pressures the ball, and he really helps establish the offense.”

Urrutia added that the senior point guard’s absence late in the game proved to be a hindrance the Spartans had difficultly overcoming.

Berthoud was in command before the Rebels’ late-game rally, holding a 39-17 lead at the beginning of the fourth period. The Spartans were out-scored 23-10 in the final period, with Hammel on the bench, but were able to hold on for the win.

Content with the win, Urrutia said he was surprised how well his Spartans played, especially on the defensive end of the floor.

Later he added that he expects more as the team continues to grow.

“We have to continue to amp our intensity,” Urrutia said. “We need to make sure we go all-out on every possession.”

Despite missing the final six minutes of regulation, Hammel finished the game with 12 points, nine of which came from downtown, and led the Spartans with five assists. Freshman McCallon Castles also hung 12 points on the board for Berthoud, while juniors Cody Braesch and Jamie Gray contributed 11 and 10, respectively. Castles pulled down a game-high seven rebounds and Braesch swiped three steals for Berthoud.

All in all, Urrutia was pleased with his team’s first performance of the season.

“We executed really well for not having had our system in for very long,” he said. “We need to improve in a lot of areas, but once we get the kinks out and the guys get comfortable with our system we will get a lot better.”

Berthoud (1-0, 0-0) will play in a pair of tournaments; the Skyline Tournament in Longmont this weekend and then as the host team in the annual Spartan Classic beginning on Dec. 10. The Spartans will begin conference play after winter break on Jan. 6 when the Erie Tigers will pay a visit to the BHS gym.

The Berthoud High School girls’ basketball team began its season on Monday with a trip out east to Keenesburg for a non-conference matchup with Weld Central. The Lady Spartans won the game by a thin 44-40 final score.

It was an important first victory for a Berthoud squad that expects to make an appearance in the state playoffs. The Lady Spartans began the game strongly, out-scoring Weld Central 18-10 in the first period and finished it almost as strongly by handing 14 on the board in the fourth.

Berthoud (1-0, 0-0) will compete in the Manual High School tournament this weekend with a group of schools from the Denver Metro area. The Lady Spartans will then serve as the host team in their own tournament, the annual Spartan Classic, which will begin on Dec. 10. After the holiday break, Berthoud will travel to Erie to take on the Lady Tigers in what will be its first Tri-Valley Conference game on Jan. 6.