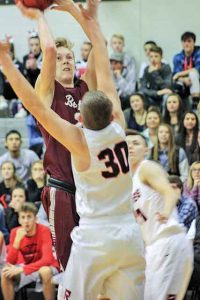 Berthoud’s Wyatt Stratmeyer goes up for a shot during the game against Roosevelt.
The Spartans lost the game 79-63.
Angie Purdy / The Surveyor

Losing focus, even if only for a short period of time, can often be decisive in a game’s final outcome. It has been a lesson that the Berthoud High School boys basketball team has learned painfully in their last two games.

Berthoud’s losing streak reached a dozen games on Tuesday as the Spartans fell by a 49-40 final tally on the road in Frederick. Four days prior, Berthoud was on the losing end of a 79-63 final against Roosevelt in a game that was closer than the final score indicated.

Against Roosevelt, it was a poor second quarter that saw the Spartans out-scored 27-9. Berthoud made good on only four shots in the period while Roosevelt sank nine, including two from downtown and added seven more from the free-throw line. While the Spartans were able to come thundering back in the third and early fourth periods, cutting the ‘Riders lead to the single digits, the hosts proved able to quickly pull away thanks in large part to junior guard Christopher Potburg making five three-pointers on his way to a game-high 27 points.

As Berthoud worked furiously to come back from a 17-point halftime deficit, it was the team’s most-seasoned players leading the way. Noah Purdy scored nine points in the period, Ben Burkett added five and Karsten Bump chipped in another four. The Spartans got within seven points with 3:14 left on the clock, but then Potburg hit two treys as part of an 8-0 Roosevelt scoring run that put the home team’s lead back to a comfortable 57-41.

“We took a few steps forward today. I was proud of the character we displayed,” Berthoud Head Coach Mike Burkett said after the game.

On Tuesday, in Frederick, it was the final half of the final quarter of the game that saw Berthoud let a one-point lead slip away in the game’s final minutes. The Spartans out-scored the Warriors 15-9 in the third period but allowed Frederick to come back to notch their first Tri-Valley Conference win of the year. Purdy made three from downtown and paced the Spartans with 16 points, while sophomore guard Curtis Peacock added another 10 for Berthoud.

Berthoud (1-13, 0-5 conf.) will try to end their losing streak when they welcome Windsor to the BHS gym on Jan. 20. The Spartans’ lone win on the season came back on Dec. 2 when they bested Windsor by a 53-47 final in the season-opening Vista Peak Tournament in Denver.