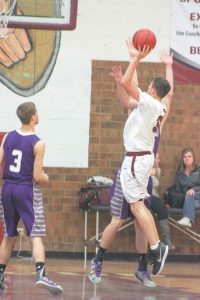 Berthoud’s Noah Purdy takes a shot during the game against Holy Family.
Angie Purdy / The Surveyor

The Spartans knew they were in for a tough test on Jan. 23 when they hosted Tri-Valley Conference (TVC) first-place Holy Family. The 2013-14 3A state champs moved up to 4A this season and have not missed a beat. The visiting Tigers topped the Spartans by 16.

While not satisfied with the game’s outcome, the Spartans knew they left everything they had on the court.

“The thing I was most proud of was I thought for the first time in a long time they played tip to buzzer, all the way through,” said Berthoud Head Coach Anthony Urrutia. “They played hard for all four quarters.”

No matter how many seemingly sure-thing baskets the Spartans watched bounce out or how big of a lead the Tigers built, Berthoud was not deterred and just kept fighting.

“I think we did a good job of keeping our heads,” Urrutia said. “They played through stuff; we kept attacking the bucket and punching through.”

Berthoud responded to a 14-0 deficit in the first three minutes of the opening period by assembling a 12-3 scoring run to the 5:47 mark of the second to cut the Tigers’ lead to 17-12.

“We should have started out stronger, but not everything can go our way, but we kept at it,” said Berthoud sophomore Noah Purdy, who hung nine on the board during Berthoud’s scoring barrage in the late first and early second periods.

Purdy, who battled some injuries early in the season, finished the game with 10 points and four rebounds. The sophomore was humble when asked about his increasing comfort playing varsity ball.

“I’ve just got to thank my teammates for the touches I’m getting, my teammates are the reason I’m scoring points,” Purdy said. “I’ve been working really hard. It all starts in practice, what you do in a practice transfers over into a game, and if you do well in practice you’ll do well in a game.”

Berthoud senior point guard Nate Hammel scored eight of his team-high 15 points in the third period and the Spartans continued to throw everything they had at Holy Family. Hammel’s drive rubbed off on his teammates and Berthoud scored 22 points in the fourth period, more than they scored in the first three periods combined.

A pair of three-pointers from Tyler Pechin and another from Cally Castles helped the Spartans out-score the Tigers 22-17 in the final frame and make the final score 59-43 in Holy Family’s favor.

“The thing that hurt us tonight is we can’t dig ourselves a 14-0 hole against a team like that,” Urrutia explained. “Holy Family is a great team, there’s a reason they’re ranking top-five in 4A.”

Playing at the BHS gym on Jan. 27, the Spartans fell 69-48 to the visiting Mead Mavericks. Even though the final tally might indicate otherwise, Berthoud kept the score competitive through the first three quarters of the contest.

Down just five at halftime, 25-20, the Spartans staged a rally in the opening minutes of the third period largely by driving the lane and drawing contact, resulting in Mead racking up five team fouls in the opening four minutes of the second half. As a result, the Spartans were able to get as close as one, 30-29, at the 3:43 mark after Cody Braesch drained a pair of free-throws. The junior center led Berthoud with 14 points on the night.

The Mavericks were able to adjust, however, preventing Berthoud from making good on their next six field-goal attempts in the period. Mead’s labor on the defensive end of the floor also bore fruit under their basket as the Mavericks made four of their final five from the floor, assembling a 16-4 run to build a 10-point lead, 45-35, by the of the third.

Led by 6’7” senior Blake Goodwin, who scored all 12 of his points in the second half, Mead drained six shots from the floor and another 10 from the foul line in the fourth period as they cruised to the 21-point win in the final eight minutes of play.

Berthoud (4-11, 0-6) will travel to Erie on Jan. 30 for a matchup with the Tigers (9-7, 5-2) as both teams begin the second half of their TVC schedule. Erie bested Berthoud by a single point, 57-56, back on Jan. 6 at BHS. The Spartans will return to their home hardwood on Feb. 6 when they host the Roosevelt Roughriders.