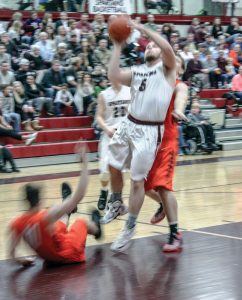 Berthoud’s Jamie Gray takes it to the hoop during the Spartans’ 78-66 victory
against the Erie Tigers on Jan. 29 at Berthoud High School.
Angie Purdy / The Surveyor

When most young people begin to play sports they do so for the sheer enjoyment of it. To put it simply, they play to have fun. As they mature and sports become more competitive at the high-school level, it can be easy to lose sight of that.

After having lost six straight games, several by lopsided margins, the Berthoud High School boys basketball team was a group that did not enjoy playing. That changed in the days leading up to the Spartans game with Erie on Jan. 29. Berthoud made a conscious attempt to put the fun back in the game and rediscovered that winning, as they did by a 78-66 final over the visiting Tigers, is the most fun part of sports.

“As a team, the last couple days we just tried to have some fun, try to loosen up; the last few games we’ve been too tight,” said Berthoud senior Patrick Barron. “So coming out today, we just felt good from the start, felt nice and lose, our confidence was sky-high.”

The change was noticeable from the opening tipoff. The Spartans played loose and at an energy level they had not demonstrated in several games. Berthoud scored on six straight possessions, including three times from downtown, to take a commanding 17-4 lead by the 2:44 mark in the first quarter.

Barron, who has returned to the court in recent games after missing time with an ankle injury, was smack-dab in the middle of Berthoud’s scoring frenzy. The senior made good on six from downtown on his way to a game-high 23 points.

“I was just feeling on, I dropped that first one, it felt good, and I said, ‘Hey, I might as well just keep shooting,’” a grinning Barron said after the game.

“We talked about how people were in the right position but they weren’t making the right play, they were just tight, super tight,” Berthoud Head Coach Mike Burkett explained. “So I made a call Tuesday night to where we were going to get back to the game and get back to playing for what we played for to begin with, which is to have fun.”

Barron and Burkett both explained that, instead of going through the intense grind and film study session that constitutes a normal practice, Berthoud held a dunk contest and took advantage of the relatively warm weather to play a four-on-four outdoor scrimmage at Turner Middle School.

“Sometimes you can over-coach, and I think I got us to a span there where we just over-coached. So we decided to take a step back and say, let’s just have some fun,” said Burkett. “It’s a lesson for me as much as it is for anyone else.”

The change paid dividends as the Spartans built a 19-point halftime lead, 46-27. The Tigers, however, staged a second-half rally. Erie made good on 10 of 14 shot attempts in the third period, out-scoring Berthoud 26-16. Their hot streak continued when a three-pointer from Alex Mathis at the 7:02 mark in the fourth cut Berthoud’s lead to just five, 63-58.

Burkett called a timeout that allowed the Spartans to gather themselves and refocus. Berthoud’s defense tightened up as they forced Erie to rush shot attempts and then began winning the rebound battle. Sophomore Wyatt Stratmeyer grabbed six boards in the fourth period. A bucket from Barron, a pair of late layups from senior Jamie Gray, and three points from the charity stripe from McCallan Castles, who scored 21 and grabbed six rebounds on the night, allowed the Spartans to keep the lead in high single digits and hold on for the win.

“We needed to get back to the roots, and what I saw tonight is what I thought we were going to be back when the season started in December,” said Burkett.

Berthoud travels to Roosevelt and Windsor for their next two games, on Feb. 5 and Feb. 9, respectively, before closing out the season with three-straight home games.