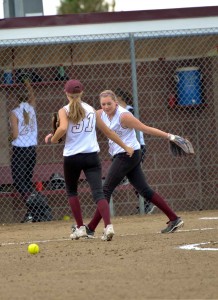 After all the work put in − a full slate of 19 regular season games, 12 conference games and the innumerable amount of pitches, hits, at bats and put outs – it is hard to fathom that the Berthoud High School softball team’s season will come down to the two-, possibly three-game regional tournament on Oct. 11. Yet that is how it is, how it has been, and probably how it always will be.

Having completed the regular season with a 13-6 overall record that included a 7-5 mark in the enormously tough Tri-Valley Conference (TVC), winning their pool in the Spartan Classic Tournament, and finishing the regular season as the Max Preps No. 7 ranked team in all of class 4A, the Lady Spartans were denied one of the eight host spots in Saturday’s state-wide regional tournament.

Instead, Berthoud will have to make the long trek down to Colorado Springs, where they are bracketed with Discovery Canyon (the host team), Thomas Jefferson and TVC-foe Mead. Two teams from each of the eight regional brackets will earn a place in the 16-team state tournament that will be played next weekend at the Aurora Sports Park.

Regardless of the less-than-ideal draw for Regionals, for which the Lady Spartans will have to depart Berthoud before sunrise, Head Coach Ashtin Williamson whole-heartedly believes her team will come ready to play.

“You can’t give excuses for things like that, you play your game regardless of where or how far you have to travel,” Williamson said. “The girls want to play…they’re excited to play someone new and they’re excited to compete.”

Berthoud finished the season batting .377 as a team, while allowing only a .224 batting average against. Something that surprised even Williamson, in her first year as Berthoud’s head coach, was her team’s prowess from the batter’s box.

“Their bats surprised me the most, just being so powerful…if I was asked to describe my team in one word it would be ‘powerful,’” Williamson said. “They have this dominance about them. It awed me at the start and continues to awe me.”

If there is one area where Williamson believes her team needs some tightening-up it is their fielding. Usually sound, the Lady Spartans have been prone to lapses in the field that lead to what Williamson has come to call “circus innings.”

“We have to toughen up the defense; we need to continue to do the things we do right,” Williamson said. “We need to make those routine plays, make those plays to avoid what I call the circus innings. We can’t make five-six errors in one inning as we’ve done; we’ve had a couple games like that and we can’t have that.”

Having finished in third place in the seven-team TVC, a conference where six teams were selected for Regionals, Berthoud was slotted as the 10 seed in the 32-team bracket. They will face off against 23-seed Thomas Jefferson in the first game at 10 a.m. Saturday morning at the Four Diamond Complex in Colorado Springs.