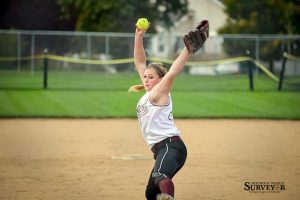 Berthoud’s Taylor Armitage on the pitcher’s mound during a game earlier this season. Armitage had an outstanding performance at the 4A softball regional tournament Oct. 17, starting two games. Armitage struck out Silver Creek’s Casey Wagner with the bases loaded in the bottom of the seventh inning to give the Spartans the victory.
Surveyor file photo / John Gardner

And the timing of the Berthoud High School softball team could not be better. The Lady Spartans are playing their best ball of the season just as the state tournament is set to begin.

Playing in regionals on Saturday, Oct. 17, at the Ballpark at Erie, the Lady Spartans bested Green Mountain 9-0 and then exacted revenge on Silver Creek, who beat Berthoud 8-3 back on Sept. 19, by a 6-3 final to win the regional championship and secure the six-seed at the state tourney.

It was the Lady Spartans’ five seniors who did much of the heavy lifting in regionals, with pitcher Taylor Armitage and third baseman Lindsay Erickson turning in particularly strong performances.

Armitage got the start in both games, throwing five innings of shutout ball against Green Mountain and all seven against Silver Creek. The senior, in addition to notching four hits, including a pair of homeruns, and driving in four, got the win in the regional title game in dramatic fashion by striking out Silver Creek’s Casey Wagner with the bases loaded in the bottom of the seventh.

Asked after the games if she was feeling fatigued or if she had any doubts her ability to finish the second game, Armitage replied, “You have to train your body to go through all of that and, yes, I was getting tired, but these girls helped pick me up and helped my physical and mental ability to go out there and do it.”

Berthoud had to respond to some initial adversity in the title game, as Silver Creek pushed a pair of runs across the plate courtesy of a Sheyann Ludwig homer in the bottom of the first inning. In the next frame a snafu on the base pads and an ugly strikeout put a quick end to Berthoud’s nascent rally attempt to tie the game as the second inning ended with Berthoud having stranded a pair of runners.

The Lady Spartans responded, however, taking the lead for good in the top of the third when seven straight players reached base on six singles and a walk. Delaney Fouts, Larissa Royer, Armitage, Madi Herbert and Sarah Jorissen all crossed home plate in the frame, giving Berthoud a 5-2 lead.

Royer and Armitage came home on a bases-loaded single by Erickson who, ironically, got picked off at third for the second out after a Hannah Langer single. Erickson finished the day 5-for-8 with five RBIs and two runs scored in the pair of games.

“The response that these girls had today with Silver Creek jumping up on them 2-0, it was a big, big character test, and they answered it,” Kouns said.

Silver Creek would not go down easily, however. The Lady Raptors scratched out a run on two singles and a walk in the bottom of the fourth, cutting Berthoud’s lead to 5-3. The host team kept the pressure on, notching singles in each of the game’s final three innings, but Armitage struck out four and the Lady Spartans played flawless defense in the field, preventing Silver Creek from getting any closer.

“I definitely think all the time in practice is all coming together at this time for the whole team,” Armitage said.

Kouns answered in the affirmative when asked if he has noticed steady improvement from the plate and defensively the last couple weeks of the season.

Herbert scored her second run of the game in the top of the fifth on a double from Erickson, giving Berthoud an insurance run. The Lady Spartans had a chance to blow the game wide-open in the frame, but Erickson was called out at third when Wager caught a line drive off Langer’s bat and doubled her off, and Jorissen was cut down at home plate on a great relay throw from centerfield when Sydney Kouns laced a line drive over second base.

With Berthoud holding the three-run lead, Silver Creek made things interesting in the bottom of the seventh. Armitage surrendered back-to-back singles to Ludwig and Rebecca Dunn before fanning Dana Dwyer for the second out. Jetta Nannen then singled to load the bases to bring the winning run to the plate. Yet it took Armitage only four pitches to strike out Wager, who had notched a pair of singles off of her earlier in the game, and secure the regional championship, and with it a trip to state for the Lady Spartans.

Asked after the game about the bases-loaded situation in the bottom of the seventh, Armitage replied: “A lot of nervousness was built up for sure, but [catcher] Hannah [Langer] has been calling all my games and she has been the one making me look good. She knows the game, she has the game mentally figured out, she really keeps me calm, I trust her; I threw exactly what we called.”

“We could shock some people next weekend,” said Kouns, “we’re better than people think we are.”