Volleyball team gets third sweep in a row 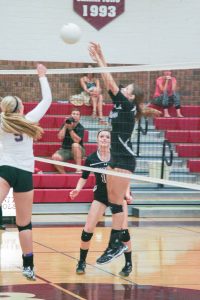 In comparing the volleyball stats of the Berthoud Spartans and the Holy Family Tigers, one would surmise that the Tigers didn’t stand a chance with the Spartans. There’s little surprise in learning that the Spartans won in three sets over the Tigers at home match on Sept. 23. Yet looking at the scores of the sets, 25-22, 25-19, and 25-22, clearly the Spartans didn’t shut down the Tigers.

“We struggled playing up to our own ability against teams that we know we can demolish. I don’t know how to get them fired up,” said head coach Daisha Agho. “I don’t feel that we play the best at home, I would rather play teams away.”

When the Spartans took on the Windsor Wizards, the team was excited and gleeful. This was a win that didn’t feel like a win to the team. They didn’t play with the fire they had in previous matches. However, the stats between the Windsor match and the Holy Family match were very similar. The main difference is that the Spartans had 50 percent more ball handling errors.

“We had bursts of energy then it would die,” said middle hitter Shaylee Pierick. “I think I could have done a lot better, but it was just one of those games. We pulled it together.”

Berthoud just came off of a high-energy homecoming week, sweeping both Frederick and Windsor. The players participated in all the festivities surrounding the football game over the weekend, which could account for the waning energy. Although they felt that they may not have been at their best, they showed that they have the teamwork to pull out another sweep against Holy Family.

“You gotta be able to fire yourself up and you’ve got to be able to find that within. If we can get that to work, then hopefully we’ll have a little bit more energetic games at home, especially with Mead, Roosevelt and Windsor coming to our place next,” Agho said.