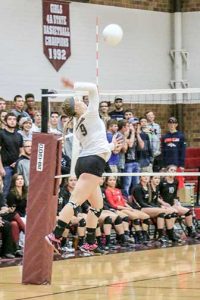 Berthoud’s Julie Ward goes for a kill against Windsor in the Spartans’ final regular season game at Berthoud High School on Oct. 25.
Photo by Paula Megenhardt

The Berthoud High School (BHS) volleyball team achieved one of its stated goals on Tuesday night in Windsor. In getting the four-set win 3-1 (25-18, 25-18, 16-25, 26-24) over the archrival Lady Wizards, Berthoud clinched a share of the Tri-Valley Conference (TVC) crown with Holy Family, who scratched out a five-set win over Mead on the same night.

“Great end to the regular season for this team,” Berthoud Head Coach Daisha Agho said. “One of this team’s goals in the early season was to finish top of our conference, they get full credit for making that a reality tonight.”

The win over Windsor marked Berthoud’s sixth-consecutive victory. On Oct. 20, the Lady Spartans routed TVC foe Frederick in straight sets (25-14, 25-9, 25-10) on senior night in the BHS gym. It was a match Agho described as an “emotional roller coaster,” that ended with the team’s four seniors on the court together for the match-winning point.

Berthoud’s serve was particularly strong in the win over Windsor, as freshman Cas Berry and Trinity Penny contributed seven and five aces, respectively. Berthoud won the first two sets with an identical 25-18 final score but allowed the Lady Wizards to respond in the third set, which the hosts won 25-16. Berthoud dug themselves a hole in the fourth set but rallied for the 26-24 win with sophomore Kailey Berry scoring the final point for the Lady Spartans.

Star outside-hitter Julie Ward led Berthoud with 17 kills on the night and Kailey Berry, who Agho said, “came with her game face on,” contributed another 14. Senior-setter Jessa Megenhardt dished out a whopping 48 assists while also leading Berthoud with 25 digs. Sophie Kathol contributed 17 digs while Ward and Cas Berry tallied 16 apiece. Agho said her team “will have to clean up our blocking and be more disciplined coming into this weekend’s tourney and the post season,” as Berthoud tallied only six blocks in the four-set match.

In their dominating win over Frederick, Cas Berry served up six aces and Shay Pierick added another four. Ward, who had what Agho described as “a hay-day on the outside,” led Berthoud with 13 kills and 19 digs. The Lady Spartans did not commit a single ball-handling error on the night. Agho singled out team manager Kenzee Bollar for praise, saying the senior, “deserves much of the credit for this program’s successes over the past four years. The girls and I would be lost without her. It’s the little things she does that sometimes go unnoticed that make her phenomenal and allow this program to run so smoothly.”

Berthoud (15-4, 12-2 conf.) will compete at a multi-team tournament in Golden on Oct. 29 after which the brackets for regionals will be set. The Lady Spartans currently rank 11th in RPI and a solid showing in Golden figures to give the team the right to host regionals. Berthoud has hosted – and won – regionals in each of the last two seasons and will aim for a three-peat on Nov. 5.