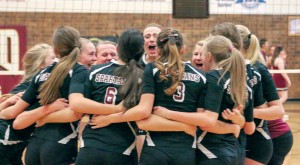 The Berthoud High School volleyball team celebrates its victory at regionals on Nov. 1 at Berthoud High School. The team is on its way to the state championships, Nov. 7-8 at the Denver Coliseum, for the first time since 2008.
Paula Megenhardt / The Surveyor

The Berthoud Spartans’ volleyball team has achieved a lot this season—it racked up a 20-5 overall record (12-2 Tri-Valley Conference), won regionals by going undefeated, and is the No. 8 seed for the State Championships on Nov. 7-8. As a part of the team effort, junior libero, Haley Hummel, is the number one leader in digs in Colorado and setter Jessa Megenhardt is ranked number three in assists/set in Division 4A.

But, they’re not done just yet.

“I’m so proud of how far we’ve come this season,” said senior outside hitter, Alyssa Peacock. “We’ve fought so hard to be where we are now and it’s an amazing feeling to have the opportunity to achieve our ultimate goal.”

The Spartans have played well as a unit, winning its last 10 matches and having won 14 straight sets before losing one set to Durango in regionals. And it’s that kind of dominance that could take them all the way.

“The science nerd in me calls them an amoeba because they all seem to flow together on defense and offense,” said Berthoud head coach Daisha Agho.

Senior Madi White is excited about the possibilities if the Spartans continue to play as they have recently.

“To make it through to state is just incredible,” White said.
This year, the team has a bond that it’s never had before. And, according to White, that’s increased the team’s level of play coming down the stretch. 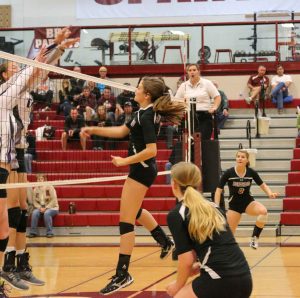 Berthoud’s Shaylee Pierick stretches for a kill against Mesa Ridge on Nov. 1, while teammates Jessa Megenhardt, far, and Julie Ward, near, cover for a block.
Paula Megenhardt / The Surveyor

“We truly play as one team and you can tell on the court,” she said. “Going to state with these girls is just amazing. We have fought so hard for this and I know each girl wants to be here so bad.”

This is sophomore Megenhardt’s second season going to regionals and second year on varsity; and she’s impressed with how the team is playing.

“It’s exciting to see how much we’ve improved in even in the past year,” Megenhardt said. “We’ve become such a great team and I have great teammates to go with to state.”

If the team playing as well as it has, especially down the stretch, Megenhardt said that she believes the success can continue.

“I think if we play the way we played in Golden, we could take state,” Megenhardt said. “We just have to play as a team, not get too confident, and just have fun.”

The team has improved significantly over last year when it finished 11-14 overall, 4-4 in the Tri-Valley Conference but lost during regionals. This is the first team Agho has led to the state tournament in her six as Berthoud’s head coach. And making the state tournament is still sinking in.

“I’m still processing that we are going to state,” she said. “It is an awesome feeling knowing that these girls you have worked with all year, and some of them for their entire high school career, have earned the regional title and are about to play at the highest level in the state.”

Each of the girls are excited about state, but none more so that some of the seniors who’ll play their last high school games this weekend.

“Going to state this year is the best possible outcome for this season,” senior Hannah Atkinson said. “I am so proud of my team for pushing past the expectations of our competitors, and becoming the type of team Berthoud hasn’t seen since 2008.”

For Peacock, and her fellow seniors, it’s a great way to end a high school career.

“Going to state your senior year is like the ultimate fairytale ending,” Peacock said. “It’s amazing to have all of our hard work pay off and to be part of such a determined, cohesive, state-bound team.”

Click here for a look at the State Championships bracket.