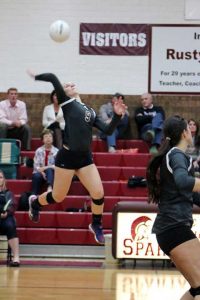 Losing streaks are one of the most difficult things to overcome in sports. Repeated and sustained defeats, no matter how closely contested, can have a snowball effect.

The Berthoud High School (BHS) volleyball team finds themselves in such a streak. After falling to Tri-Valley Conference (TVC) foe Holy Family at home on Oct. 6, the Lady Spartans have now come up on the short end in four straight contests. The current skid is Berthoud’s longest losing streak since the end of the 2013 season.

“Volleyball is a game of mistakes, the team to make the fewest wins. This really sums up our match against Erie,” said Berthoud Head Coach Daisha Agho.

Said Agho, “Coming off of two tough losses in a row, I was worried about our resiliency … against a team like Erie who has improved with every match this season. Unfortunately we have not bounced back yet and it showed early in tonight’s match.”

Berthoud did battle back after losing convincingly in the first two sets to take the third, as was their custom in the first half of the season, but ran out of juice in the fourth set, ultimately succumbing to Erie 25-21.

“We rallied late, too late. I’m confident in these girls and their abilities, but we just have to play better,” Agho said.

In the match, Julie Ward tallied 13 kills for Berthoud and Shaylee Pierick 11 to go with three aces. Senior libero Haley Hummel led the Lady Spartans with 24 digs, continuing her dominance in the TVC in that category.

After battling to a 7-7 tie in the first set, Berthoud caught fire, scoring nine of the next 11 points to take a 16-9 lead and ultimately cruising to the lop-sided 25-12 win. The Lady Tigers bounced back quickly, however, scoring 13 of the first 17 points in the second set, which they won in dominating fashion.

The final three sets, however, were much more closely contested. The third and fourth sets both saw a tie score 10 different times. The fifth and decisive set came down to the wire. Trailing 12-8, Berthoud scored five of the next seven points with Berthoud’s last point of the night, a kill from Kailey Berry that found the opposite corner of the court, put the home team down just one, 14-13. Holy Family, however, after a short rally, returned the ball just over the backs of Berthoud’s front line for the 15th, and final, point of the night.