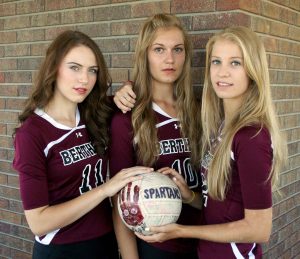 Seniors Madi White, Hannah Atkinson, and Alyssa Peacock plan to kill it on the court this season.
Dan Megenhardt / Special to the Surveyor

The anticipation for the Berthoud High School volleyball team is electric. Coach Daisha Agho is pumped about the prospect of this year’s squad.

“This season promises to be exciting and fun to watch,” Agho said. “These girls have so much talent and heart and will leave it all on the court. I’m excited to get the season started to see these girls kill it … pun intended.”

The team finished 11-14 in 2013 and made it to regionals for the first time since 2008. Although the team will feel the loss of last year’s seniors: middle Ashley Lozinski, setter Emma Fate and libero Sarah Parker, the roster is solid.

“We’re depending on the seven to make this season a success as we are focusing on defense which is only successful if the entire team is on the same page,” Coach Agho said.

She will run a 5-1 offense and feels that there’s lots of room to swing players from Junior Varsity.

“It’s going to be an exciting season even though it will be a small team,” said White. “We’re getting more one-on-one time in practice, and it’s an opportunity for all of us to get even better.”

“I think we’re going to have a lot more cohesiveness and be a lot more bonded than we were last year,” Peacock added.

“Everyone’s going to get more court time,” she said. “If it’s the same group on the court the entire time, I feel like that’s a good thing.”

“I’m looking to my seniors for leadership on and off the court. Hannah is a powerhouse and a huge threat. Alyssa is a very smart player who scores points by her ability to place smart shots when we need them. Madi’s high competitive nature pumps up the team and she puts up a big block to shut down other middles and outsides. All three have the competitive edge to help lead this year’s team successfully,” said Agho.

In the 2013 season Atkinson had 147 kills, the team high. Peacock boasts a 93.3 percent on her serves. Hummel is a force in the back row with a total of 153 digs for the season. Megenhardt had the highest percentage of ace serves at 17.8 percent, while assisting on 204 attacks. Pierick swung up from varsity to show that she has what it takes to fill Lozinski’s shoes. And Julie Ward has shown in preseason play that she may be young, but the power she has on the right side will be tough for opponents to handle.

The Berthoud girls have already had the opportunity to show their determination and heart by rallying past Mead 29-27, 25-19 in the semifinal in a pre-season tournament at University High School on Aug. 2. Berthoud finished second to University. Watch the volleyball women this weekend at Windsor High School, Aug. 23, for another pre-season tournament. Berthoud hosts Resurrection Christian on Aug. 28. All Varsity games start at 6:30 p.m. following the C Team (4:30 p.m.) and JV (5:30 pm) matches. For a full schedule, go to www.berthoudsurveyor.com and click on the BHS schedules under the sports header.