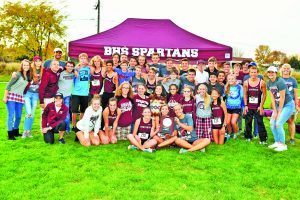 Supported by their cheering teammates, Berthoud qualified both the boys and the girls teams to the state cross country meet for the first time since 1984.

It has been 34 years since Berthoud High School (BHS) has sent both a full boys and a full girls team to the Colorado State Cross Country meet. This season’s team shirt depicts the emergence of Superman, like in the popular 1984 movie Superman III. Only four times in the history of the school (1978, 1979, 1984 and 2017) has Berthoud been represented like they will be on Saturday, Oct. 28, at the Norris Penrose Event Center in Colorado Springs.

In cross country only the top four teams in the regional meet qualify for the state meet. Individual athletes who finish in the top 15 qualify as well. Therefore, a lot of pressure is placed on the regional meet. This year the regional meet was held at Monfort Park in Greeley. Known as a fast course, Berthoud’s harriers were ready to post some fast times.

The boys were the first to race. Kade Leonard, Noah Burtis and Jonathan Wyrwas maneuvered smoothly through the start and found positions in the top 20. The rest of the team seemed to be positioned a little too far back in the pack according to the race plan. The course made two loops around the park, giving spectators a great view of how the race was unfolding. On the first loop it looked as though Berthoud’s top boys would qualify as individuals, but team qualification was unsure. During the next mile everything would shift for the Spartans.

Leonard and Burtis began falling back, getting passed by other runners. With about three-quarters of a mile to go it looked as though Berthoud would not have a single qualifier. Then Eli Greenslit came around the corner, passing two and three competitors at a time. Siler Stein, who had been struggling, got a second wind. Kyle Conlon followed suit, quickly moving up in the pack, closing the gap on teammate Kevin Sethre. Carlos Gutierrez found another gear and began to power through the final half mile. Murphy Zimmerling started to move through the field of runners packed near him.

The question raised by every BHS fan, “Was it good enough?”

Quick tallying gave a small glimmer of hope that Berthoud may have finished in fourth place, but the results were somewhat confusing. Nine runners were allowed to race and were listed on the scoring results, but only seven athletes actually counted for placings. Berthoud was in fourth place with nine runners, but what would happen when the extra runners were removed from the scores of other teams like Estes Park and Resurrection Christian? To add to the suspense, team scores were not posted after the race.

Berthoud brought the entire cross country team to Greeley to cheer. While the boys were wondering if they had qualified, the girls race started. Maycee White and Cailey Archer secured themselves in the top 10. Ellie Sundheim followed in 18th place. Alex Schultz was close behind. Alyssa Radloff looked to be struggling some, but Liz Bosnich and Julianne Evans Dennison were holding form. On the second pass around the park, White, Archer and Sundheim held their positions. However, Schultz had fallen back and Bosnich had to walk a few steps due an asthma attack. Evans Dennison was losing ground, but Gigi Babyak was moving up closer as was Kathryn Mathiesen.

Frontier Academy was definitely going to win. However, the girls from Brush, Eaton and Estes Park were moving up on the Spartans. The lead of Berthoud’s first three runners could easily be lost on the final two scorers. Schultz held her position and Radloff passed about six competitors in the final mile, closing the gap on the fifth-place girl. The scoring on the girls side looked to be close.

Berthoud’s supporters totaled over 70 people huddled together to hear the results. Leonard was recognized along with the other top-15 state qualifiers. The boys team standings were announced in reverse order. A total of 13 teams were represented. Resurrection Christian, which was one team with the potential to knock Berthoud out of the scoring was called for sixth place. Berthoud’s team and supporters felt nervous butterflies in their stomachs. When Estes Park was announced for fifth place, a huge cheer arose from the Berthoud crowd. The boys would be going to state as a team for the first time in four years.

Next up were the girls individual qualifiers. With White, Archer and Sundheim in the top 15, the likelihood of a second state appearance for this team in as many years began to look possible. The countdown of teams continued. In the end, Berthoud’s girls had placed second and won a plaque for the effort. Frontier Academy won the team competition. Brush was only two points behind the Spartans, and Estes Park had taken the final team bid to state.

The state meet will be held in Colorado Springs on Saturday, Oct. 28. The boys race at 12:40 p.m. and the girls race at 2 p.m. The highest place of a Berthoud team in the past 10 years is the 2010 girls who placed ninth. Emma Otto, Stefani Messick, Julia Leonard, Emma Degnan, Hannah Kirk and Dillon Fagler represented the Spartans, and Aiden Colton was the only boy to qualify that year.