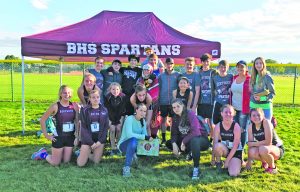 Championship season has begun for the Berthoud High School (BHS) cross country team. The freshmen and sophomores got an opportunity to test their skills against others of their age by participating in the Pat Amato Frosh/Soph Meet on Tuesday. While this meet is not considered a championship meet, it was the only time the younger runners have got to race without having the juniors and seniors in their races.

When Berthoud arrived at the Northwest Open Space in Northglenn, the athletes noticed most of the teams were large Denver-metro schools like Legend, Standley Lake, Horizon and Brighton High Schools. The athletes were told by coaches not to be intimidated by the size of the school. Just to go out and run the best race possible. After getting out the nervous energy, Berthoud’s boys settled in and ended up placing third in the 14-team event. BHS girls team finished in 10th place.

The boys were the first on the course. Kyle Conlon and Carlos Gutierrez set their sights on a top-10 placing. Initially the pair seemed surprised to be running so close to the front but soon settled into the pace. Conlon and Gutierrez stayed together for much of the first mile. In the second mile Conlon stayed in the hunt for the top spots but Gutierrez fell back a little. Once contact is lost, it is difficult to regain it in cross country. Conlon battled through the race in which fourth place to ninth place was separated by only 12 seconds. Conlon finished in seventh place with a time of 18:20. Gutierrez’s slight lapse cost him an individual trophy as the sophomore finished in 11th place with a time of 18:41.

Bryce Mitts was Berthoud’s third scorer, in 23rd place with a time of 19:13. Lane Pirkey ran his first race after sitting out almost a month for an injury and finished 27th in 19:31. Eric Godfrey was the final scorer for Berthoud, breaking 20 minutes for the first time in 41st place in 19:59. Kace Thoren was close behind in 20:05. Ashton Gonzales ran a personal-best time of 20:20 for 51st place.

Ellie Sundheim and Alex Schultz ran their fastest times of the season on the course. Sundheim set a goal to finish in the top 25 and committed to the goal early. Coming into the two-mile mark, Sundheim was in 21st place. She was told what position she was in and she reset her goal to finish in the top-20 and immediately passed two runners. The two runners, one from Rocky Mountain and one from Standley Lake, were not going to give up easily. One girl from this group of three would surge and the other two would cover. As the three of them raced one another to the finish, they caught up with another runner from Standley Lake. All three of them passed that girl racing down the final eighth of a mile. Sundheim finished in 18th place with a time of 21:36, her fastest time of the season. Alex Schultz ran 22:59 for 40th place. Julianne Evans Dennison, Genevieve Babyak and Kimberly Blough were the next three scorers for Berthoud. They finished in 71st, 84th and 91st places respectively.

The next meet for the Spartans is the Tri-Valley Conference meet at Holy Family.