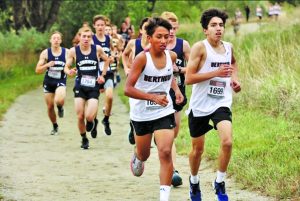 Photo by Kristi Leonard – Berthoud’s Emmanuel Hernandez and Julian Rayon finished ahead of the Liberty Common boys that are on their tail in this picture.

Just like a good card player, Berthoud High School (BHS) cross country coach Jordan Jennings isn’t showing all of his cards yet. Jennings has chosen to hold out some of his varsity harriers in each of the meets this season for one reason or another. Some athletes are doing a higher volume of training and racing doesn’t fit into the program for the week and other athletes are resting to keep injuries at bay, and others are starting the season slowly to be ready for the regional, state and post-season meets.

Fewer varsity athletes gives younger and lesser experienced runners opportunities that they are stepping up to. Jennings is also having his team race at meets this year that are different to their traditional schedule. They opted this week to run in a local meet put on by Frontier Academy rather than run the Liberty Bell Invite which produces blisteringly fast times. But Jennings knows what he is doing, it’s all in the cards. He is bringing his team along at a pace that will enable them to reach their peak performances at the end of the season.

The meet entitled Running From the Past Classic was held last Saturday in Greeley. Jennings noted, “We wanted to provide our kids the best opportunity to see their state and regional competition. Also, it provided a smaller meet size to work more intentionally on team competition. Frontier (Academy) put on a phenomenal meet with a great post-race party for the kids. Definitely a meet we will continue to do as we try to be one of the best programs in the state.”

On the boys side, The Classical Academy (TCA) won the team competition with 26 points. Berthoud was second with 66 points followed by Frontier Academy (FA) with 74 points. Holy Family (HF) placed fourth with 197 points. TCA is the defending state champs and FA won in 2020. Berthoud was led by Tate Bothun in third and Scott Clark in fourth. Daniel Hatton (15), Aiden Malherbe (19) and Evan Torres (25) rounded out the scoring for the Spartans.

The Spartans will be back on the circuit on Sept. 23 when the race in the Longs Peak Invite in Estes Park.