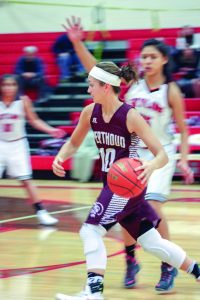 Berthoud’s Sydney Meis charges to the basket during the Spartan’s contest against Skyline in
Longmont on Jan. 6.
Angie Purdy / the Surveyor

In just about every sport, there is perhaps no stat more telling than turnovers.

In their last two games, both losses, the Berthoud High School girls’ basketball team turned the ball over a whopping 49 times. Berthoud committed 25 turnovers in a 30-28 loss in Longmont to Skyline on Jan. 6 and then gave the ball away 25 times Tuesday night as they fell to visiting Holy Family by a 51-38 final.

“We can’t win games when we have 25 turnovers like we did Friday night and then 24 again tonight; you’re not going to win when you make that many mistakes,” Berthoud Head Coach Randy Earl said after Tuesday night’s loss to Holy Family.

Despite taking somewhat different approaches offensively in the two games, playing more methodically against Skyline but pushing the pace and increasing the tempo against an athletic Holy Family squad, the results were the same.

As senior Sarah Howard explained after Tuesday’s contest, “Coming from the Skyline game, which was an insanely low-scoring game for us, we were really looking to work on offense tonight, and yeah, speed up … but we weren’t slowing down enough to make sure we had an open player for the shot. We weren’t very smart with our passes; we had a lot of open players we didn’t hit.”

The Lady Spartans entered the contest with Holy Family planning to play faster, as Earl explained, “We just had to play with a little more intensity and a little more enthusiasm,” but the quick pace led to some early mistakes which allowed the visiting Lady Tigers to build a lead they held for the rest of the game. Six Berthoud turnovers in the opening half of the first period helped spawn a 10-2 Holy Family run.

Holy Family’s run proved to be decisive in the game as, despite threatening several times, Berthoud was never able to fully close the gap. The Lady Spartans got closest in the second quarter as a pair of three-pointers from Howard coupled with a four-for-four effort from the free-throw line from junior guard Ashlee Burdette got Berthoud to within four, 23-19, with just 34 seconds remaining before halftime.

Yet the Lady Tigers opened the third with an 8-3 run, thanks in part to four Berthoud turnovers, to push their lead back to a comfortable 33-22 margin. Even three-pointers from Emily Cavey and Sydney Meis in the final two-plus minutes of the third period could not get Berthoud within striking distance; the third quarter ended with the visitors from Broomfield ahead by 13, 43-30.

“I feel like more of them were unforced errors on our part, yeah defensively they’re a great team, but we definitely had more than we should have tonight,” Howard explained. Cavey paced Berthoud 16 points on the night while Burdette added another 11 and both pulled down a team-high seven rebounds.