The Berthoud High School girls basketball team has turned in a pair of epic wins in their last two contests, rallying from behind to defeat Glenwood Springs by a 49-40 final and then having to battle to the very last second to defeat St. Mary’s 59-58. 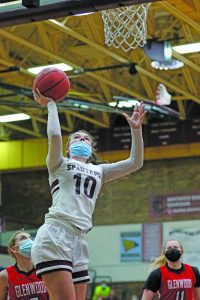 Photo by ACP Media Berthoud’s Aidan Carr goes up for a layup last Saturday again Glenwood Springs. Berthoud trailed for much of the game but staged a rally to come from behind a get the win by 49-40 final score and then on Tuesday night won at the last second against St. Mary’s to get to 5-0 on the season.

Playing in a rare Saturday afternoon tilt with visiting Glenwood Springs, Berthoud found themselves in unfamiliar territory – behind on the scoreboard for a long stretch of time. The Lady Spartans began the game ice cold from the floor, missing their first eight shot attempts as Glenwood built an 8-0 lead before superstar senior Ally Padilla made a free-throw to get Berthoud off the schneid.

Five points from Aidan Carr, a three from Reece Kraljic and a bucket from Addy Kirkpatrick helped Berthoud get back in the game late in the first quarter, which ended with Glenwood holding a 15-11 lead. Glenwood proved adept in two key areas – they shot well from the floor, making five of their first six shot attempts including two from downtown, and they were regularly able to beat Berthoud’s full-court press defense and turn in easy lay-ups on the other end.

Berthoud made a few adjustments during the halftime break, from which they emerged trailing by only five, 24-19, and their shots began to fall in the third quarter. A lay-up from Carr and a big three-pointer from Sidney Premer knotted the score at 24 just a minute into the second half. Yet, Glenwood kept at it and re-took the lead.

It was not until just 2:50 remained in the third quarter that Berthoud got the first lead of the game when Anndee Davidson cashed in on a pair of free-throws that put the Lady Spartans ahead 29-28. They would not relinquish the lead and went on score 20 of the game’s final 32 points over the remaining 11 minutes of game time.

Davidson made two more from the charity stripe with just 15 seconds left in the third quarter to give Berthoud a 33-31 lead entering the final period of play. Carr made good on an and-one and drained a long jumper in the fourth quarter and Padilla swished a three-pointer at the 4:57 mark to put her squad up by nine, 42-33, at which point Berthoud began working the clock and subbing players in and out depending upon whether they were on offense or defense. Premer proved clutch from the line in late in the fourth quarter, making good on five of six free-throws as the Lady Spartans kept their guests at arm’s length and cruised to the nine-point win.

“We didn’t panic, we stayed with the game plan, the girls played exceptionally well in the roles they were given here today with the offensive and defensive switching we used so often in the fourth quarter, they handled that really well,” Gibson said after the game. “They didn’t get down after a tough, tough first half of shooting. Being behind was new territory for us and they responded to that and came up clutch in the second half.”

Hosting St. Mary’s on Tuesday night, things started off splendidly for Berthoud as they built and kept expanding upon a first-quarter lead. Two three-pointers from senior Carly Fischer and 12 points from Padilla were the big factors in a first quarter that saw Berthoud double-up their guests 26-13.

Yet St. Mary’s, a 3A team who made the long trek to Berthoud from Colorado Springs, did not let the early deficit phase them. Slowly but surely they clawed their way back into the game, out-scoring Berthoud 16-13 in the second quarter and then by an astounding 15-1 tally in the third to take a 44-41 lead into the final eight minutes of regulation.

“They brought everything they had, it’s kind of hard to explain, we got off to such a great start, we were playing exactly how we wanted to play but they got the momentum going into halftime,” Gibson said after the game, noting his squad became complacent after having built a big early lead.

The final period was as good as basketball get with both squads trading shots and leaving it all on the court. A jumper and a lay-up from Carr sandwiched two free-throws from Davidson to get Berthoud ahead 47-46 with 4:59 remaining. An epic three-pointer from Lilly Strait followed before Padilla drove the lane for a lay-up and gave Berthoud some breathing room with a 52-47 lead.

St. Mary’s answered, swishing a three-pointer and making good on a pair of free-throws to tie the game at 54. Berthoud’s guests followed with a jumper and took a 56-54 lead before Padilla drained a trey that put the Lady Spartans back in front, 57-56. St. Mary’s answered with a lay-up of their own, taking a 58-57 lead and leaving Berthoud just 7.8 seconds for their final possession.

With just second remaining, Gibson drew up play but told his players to be ready for anything. St. Mary’s guarded outside and Berthoud got the ball to Carr in the post, her game-winning bank shot just missed the mark but Padilla crashed the boards, grabbed the rebound and immediately put up a shot which found the bottom of the net as the final buzzer sounded to give the Lady Spartans the 59-58 win.

“Coach drew up the play and if I was open for the three I was going to take it, if not, we have Aidan, who is a great post and we were supposed to get it down to her, there was not plan for the rebound,” Padilla said of the final play. “We play war in practice, it’s just a free-for-all, and I just thought ‘this is war,’ so go get it, and it was really great it worked out.”

Berthoud (4-0) will welcome Erie to the Rusty Mathena Gymnasium at BHS for their next contest this Friday night with varsity tipoff set for 7:00 p.m.