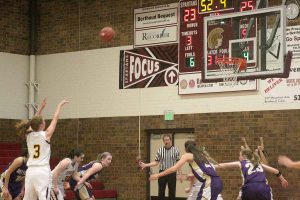 Befitting its name, there are three tickets out of the Tri-Valley Conference (TVC).

Three teams from the TVC are guaranteed a spot in the state playoffs, while the team that finishes in fourth will be crossing their fingers for one of the state’s five at-large bids.

Of the four contenders in the TVC – Holy Family, Windsor, Mead and Berthoud – only Holy Family has a punched ticket to state with their 13-0 conference record. The other three are left battling for two guaranteed spots.

Windsor has beaten Berthoud twice but also lost to Mead twice. Even though both teams have a one-game lead over Berthoud, a Berthoud win in Mead tomorrow night would give the Lady Spartans the tie-breaker over Mead as both teams would finish with a 10-4 conference record. Regardless of what happens in the Windsor-Holy Family game, the Berthoud-Mead affair serves as a win-or-go-home for both teams.

Playing last Friday at Berthoud High School, the Lady Spartans walloped the visiting Lady Warriors of Frederick. Perhaps letting out a little frustration after the previous week’s razor-thin loss at Windsor, the game was over not long after it began.

Led by junior Kristina Cavey, the Spartans ended the first period up 20-3. Cavey scored the first nine points of the contest, on her way to a game-high 25, as the Lady Spartans shot 9-for-14 from the floor. Lindsay Erickson put an exclamation point on Berthoud’s first period fury as she drained a three-pointer as the final tenths of seconds ticketed off the clock.

“They just needed to start good and that’s what we did…they played well early and they just kept going,” Berthoud Head Coach Randy Earl said after the game.

Even though it appeared clear from the get-go that the ultimate outcome of the game would not be in doubt, the Lady Spartans did have a few hiccups along the way. Four turnovers and a zero-for-five shooting stretch on Berthoud’s part allowed Frederick some life in the middle of the second period, but it was nothing more than a few gasps as the closest the score got was 23-9 at the 3:25 mark.

Audrey Kouns found Taylor Armitage under the basket at 1:18 mark to set up Berthoud’s first field goal of the period and trey from Cavey as the final seconds ticked off the first half clock gave Berthoud a 31-12 advantage at halftime.

“We’re here to play… so we go out and just do what we do, let’s go out and play the way we know how,” Cavey explained. “We came in thinking let’s play together and I think we really had that mindset; we weren’t going to let anything get in our way tonight.”

In addition to her 25 points, Cavey also led the Lady Spartans with seven rebounds and seven assists. Armitage scored 13 while Maria Fate added seven and Kouns another six.

Playing Tuesday evening against TVC first-place Holy Family, the Lady Spartans learned how very little, if any, margin for error they had against the defending 3A state champion Lady Tigers.

The Lady Spartans held their own throughout the first half, jumping out to an early 10-6 lead by making good on five of their first six shot attempts. The Lady Spartans matched Holy Family’s 5-0 scoring run in the opening minute and a half of the second period with a 5-0 run of their own, thanks to a jumper out of the hands of Sydney Kouns and an and-one from Cavey to knot the game at 17.

A few lax minutes from the Lady Spartans and a few opportunistic ones from the Lady Tigers ultimately swung the game in the visitor’s favor. Holy Family assembled a stretch where they made good on five straight field goals, four of which came courtesy of sophomore guard Casey Griggs and wrestled control of the game away from Berthoud.

“We just didn’t play good enough defense. They can score, so we’ve got to go down and score on our end, but we kind of quit scoring on our end too, so it was a combination of those two things,” Earl said of Holy Family’s decisive third-period scoring run.

The Lady Spartans were unable to catch up in the fourth period. A pair of buckets from each of Armitage, Fate and Audrey Kouns gave the home team some late life but the Lady Tigers’ 9-for-14 mark from the foul line kept Berthoud at arm’s length and clinched the game for the visitors from Broomfield who remain undefeated in TVC play.