With Alan Gibson there is no coach speak. The Berthoud High School (BHS) girls basketball coach said at practice on Monday afternoon his 2018-19 squad will be one where the whole is greater than the sum of the parts.

Gibson extolled the depth and raw talent of his varsity roster, noting how well his players’ individual abilities all complement one another, and the group has fully embraced the team-first concept that has been the central focus of the preseason practices. 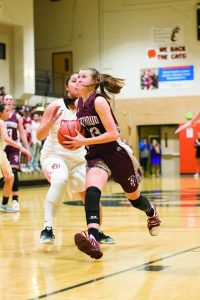 File photo – Berthoud’s Bre Fowler streaks down the lane in the second round of the 4A state playoffs last February. Fowler is a key player who is returning for a Lady Spartans squad which hopes to advance further in the state playoofs this season.

Yet the coach was not going to avoid the elephant in the room, the absence of junior superstar Emily Cavey, who will be missing at least a portion of the year as she rehabs from a knee injury. “That is still up in the air,” Gibson said of Cavey’s potential return. “It may happen, it may not happen this year. It will depend on how the rehab process goes. If she is not 100 percent, she is not coming back.” Cavey was spotted participating in some light shooting drills at Monday’s practice.

Even with the potential that last season’s team leader in points, rebounds and steals will miss at least a portion of the year, the team is not shy in stating their goal is to advance past the second round of the state playoffs, where their season ended last year.

Senior point guard Sydney Leeper returns for her fourth year on the varsity roster and will be the facilitator of Berthoud’s offense. Leeper explained the team has not missed a beat with the absence of Cavey and Logan Davidson, Berthoud’s second-leading scorer from a year ago who opted for early graduation, saying, “The way I see it is we lost two players, but in a sense we didn’t lose anything. People step up, I’ve stepped up, Bre (Fowler) has stepped up, Celsey (Selland) has stepped up. We just have a lot of girls who can really play; there is not a hole.”

Leeper, who took home All-Conference and All-State (honorable mention) honors last year and just recently committed to play collegiately at the South Dakota School of Mines, was noticeably upbeat about the season to come, explaining, “Our shooting percentage is going to be much higher. You will see a lot of transition shots. We’ve been working a lot on our up-and-down game. We’ve been working on stealing and our attack mode.”

Gibson praised Leeper’s on-court ability as well as the intangible qualities she brings to the team, calling her “our unquestioned leader … on the court and off the court,” and saying her presence and experience, “makes things a whole lot easier.”

In addition to Leeper, Berthoud will return several players who contributed meaningfully last season. Fowler, a sophomore guard who grew by leaps and bounds last year, will have a big role on the squad this year and was one of several players Gibson praised. “She has grown physically and her game has really improved a lot in all areas. I think she’s a better ball-handler, she’s a better passer, and she’s a much better shooter,” Gibson said of Fowler. “When you have a player that is as quick and fast and can beat people off the dribble, plus shoot from the perimeter, it’s going to be that two-edged sword where other teams are going to have to pick their poison with her.”

A pair of six-foot juniors in Selland and McKayla Milan both have meaningful experience from last season and will provide a big help for Berthoud in the post. Senior Addi Spears and junior Maddie Barchewski have fierce competitive spirits and substantial raw athleticism that helps bolster the Lady Spartans overall depth and will give opposing teams fits on the open floor. Senior Eriana Rennaker played in all 25 games last year and brings invaluable experience and the ability to contribute all over the court.

Berthoud will begin the 2018-19 season with the three-game Spartan Classic beginning Thursday evening at BHS. The Lady Spartans will take on Mountain View, Bear Creek and Adams City over their namesake three-day tournament.