There might have been a little bit of rust accumulated after the two-plus week layoff over Christmas Break, but it did not take long for the Berthoud High School girls basketball team to knock it off.

Playing their conference opener last Friday night at home against Riverdale Ridge, Berthoud got off to somewhat of a slow start but turned it on in a big way in the second half, ultimately winning the game by a comfortable 54-43 final. The Lady Spartans kept the momentum going on Saturday afternoon when they laid down a 62-31 drubbing of visiting Summit High School. 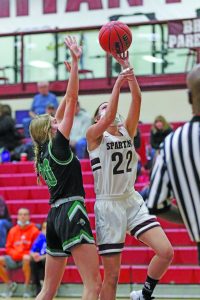 Photo by ACP Media – Berthoud’s Lia Koolstra goes up for a shot over the defenders from Summit on Saturday at BHS. Koolstra and the Lady Spartans have won three straight games coming out of the holiday layoff to improve to 10-1 on the season.

“We started off a little slow but after a while we started to get a lot more cohesive with each other, we got on the same wavelength and think then we started playing really well as a team,” senior Addy Kirkpatrick said after the win. “It takes us a second for it to kick in and for us to all be thinking the same thing at the same time but then we settle in and it works really well for us, we have a real strong team and really strong family feel.”

Berthoud began the game cold from the floor as Riverdale built a 9-4 lead by the midway point of the first quarter. At the 4:27 mark of the second quarter, superstar senior Ally Padilla drained a midrange jumper to knot the score at 12-12. The Lady Spartans made good on six of seven from the foul line in the period and entered halftime trailing 21-18.

During the break, Berthoud made some adjustments, focusing on getting the ball down into the paint which had the two-pronged effect of increasing the likelihood of taking high-percentage shot attempts and drawing more fouls.

“I think the key was trying to get the ball inside and get something going down there, we were patient with the offense, we did some isolation plays and that allowed us to improve there,” Berthoud Head Coach Alan Gibson said of the adjustments he and his staff implemented at halftime. “We forced them to foul a lot when we got the ball inside and we were in the bonus for a good portion (of the second half).”

The adjustments worked from the opening possession of the second half. Lay-ups from Padilla and Anndee Davidson gave Berthoud their first lead of the game, 22-21, just one minute in. Katie Vierra, who turned in a splendid performance in all aspects of the game, cashed in on an and-one to keep Berthoud’s lead, 25-24. She made good on another free throw late in the third to tie the game at 33 entering the final eight minutes.

“We have great coaches who can really assess the game and help us make adjustments, our team is really good at adjusting, we can change up our defense really well, we can use the press, we can play back, it’s just all about being able to adjust,” Vierra explained.

The Lady Spartans played terrific basketball in the fourth quarter. Padilla drained a three-pointer and Kirkpatrick swished another long jumper to give Berthoud a 38-33 lead from which they would never look back. Sophomore Paige Farnam came off the bench and, on back-to-back possessions, made a three-pointer and a lay-up to push the score to 43-35.

“Our message is just to have a resilient demeanor, to have a persistent approach, a confident approach down the stretch and make our free throws and then Ally and Paige had fantastic fourth quarters,” Gibson said.

Aidan Carr turned in an excellent game on Saturday afternoon when Berthoud hosted Summit. The junior post scored a team-high 22 points and pulled down nine rebounds as the Lady Spartans doubled up their guests, 62-31. Padilla scored 18 while also grabbing nine boards, dished out eight assists and swiped an astounding 11 steals in the win.

The Lady Spartans traveled down to Frederick on Tuesday night for their first road conference game of the season and had their way with the Lady Warriors, winning by a convincing 54-33 final. Berthoud held just a 22-20 lead at halftime but caught fire in the second half, out-scoring their hosts 22-4 in the third to take control of the game and cruise to their 10th win of the season.