The making of a champion

No one ever said that winning is easy. Yet Berthoud High School (BHS) senior Jamie Dellwardt can certainly make it look like it at times.

While Dellwardt can make swimming look easy at times, her championships, as well as the athletic scholarship she earned from the University of Northern Arizona, where she will pursue a course of study in biomedical engineering, came about as a result of enormous hard work. Dellwardt said she completes 13 practices per week, spending 26 hours in the pool between high school practices as well as work for the elite Loveland Swim Club. She spends additional time on dry land work, which involves weight training, cardio, calisthenics and the like. 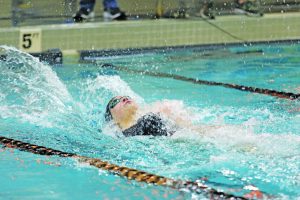 Photo by Angie Purdy Berthoud High senior Jamie Dellwardt competing in a BHS swim meet this year. Dellwardt turned in a season for the ages, winning two state championships and being named 3A Swimmer of the Year.

“I put in a lot of hours,” Dellwardt said, explaining she practices every morning, ever afternoon and on Saturdays. “I’ve had a few times … where I thought ‘is it worth it?’ but I always decided it was, I always knew I had the love and I’ve never doubted that I chose the wrong sport.”

Matthew Goldsmith, BHS head swimming and diving coach, spoke on Dellwardt’s commitment and dedications saying, “I can’t speak enough about Jamie’s hard work and love of the sport. Jamie decided that year-round club swimming will prepare her in reaching her high school goals, and beyond. That dedication takes time, sacrifice, and work, which becomes a balancing act with school, family, social life and other interests. It would be unwise to say it is easy and for everyone. I would be remiss, however, if I didn’t say it is always worth it.”

This year Goldsmith, in his third season leading the Berthoud program, was named 3A Coach of the Year. “It’s an honor being named 3A Coach of the Year, but to be voted in by my peers is truly special. My philosophies, developed through experience and academic research in sport, have always revolved around what is best for the student-athletes and the sport of swimming,” Coach G, as his swimmers call him, said but added that it’s not his award alone. “To be recognized for my efforts in acting on and succeeding in the philosophy is encouraging as a professional. However, a large reason this award happened is because of the Berthoud swimming and diving community. These athletes and families are incredibly special and have made this possible. This is ultimately a shared award.”

While Dellwardt has been swimming competitively since junior high, it was in her final three years of high school, swimming under the Berthoud banner, was when she truly began to flourish. Dellwardt collected 75 first place finishes in high school meets alone, the two state championships providing the cherries on the parfait.

Yet swimming for her school – Berthoud did not create their formal girls swim team until Dellwardt’s sophomore year, as Berthoud athletes competed for Thompson Valley – brought Dellwardt and her teammates closer together and pushed them to achieve greater heights.

“It meant a lot to me to wear my school colors, because everything I did freshman year went and helped Thompson Valley’s reputation and Berthoud got basically none of that so being able to use our own colors, use my times and my efforts towards my school, I was really happy about that and as a team we became really close because we’re together all the time, it’s just us and we’re together now,” she explained.

Dellwardt explained the high school competition was more about enjoying the meets, enjoying the kinship of the team while the club meets were more intense and competitive. As part of the Loveland Swim Club, Dellwardt has traveled around the county, competing in national events where she has gotten very close to times to make the cuts for Olympic trials.

“Club is definitely where I have tighter races, people to chase after and it’s where I end up making cuts for junior nationals and things like that but at the next couple club meets we have opportunities to make Olympic trials,” Dellwardt said, adding that she “definitely” has the goal in mind of earning a spot in 2024 summer Olympics as she has been getting incredibly close to the cut times for the trials. “My goal is to get as close to trials cuts if not make them, prove to myself I can do it,” she said.

Whether it has been high school or club, a Tuesday afternoon dual or the state championships, Dellwardt said she would not trade a second of it for anything. She explained the life lessons she has learned as a competitor has impacted all areas of her life. “It has taught me a lot of patience, I have had a couple times where I thought I played for a while because I wasn’t’ able to drop times even though I know I should have and I think a lot of it was my mental strength,” she said.

Like many athletes who have called Berthoud home, Dellwardt said the community support she has received is amazing and has inspired her to perform at even higher levels. “I think this community is amazing, just because of the all the support I have received over the years … it has helped me push myself further because I know even if I don’t quite make it I know they will still be there for me, I have those people rely on and I think that’s really what helped me to realize I need to be pushing a little bit harder to my goals every time I get the chance.”