What do all those firsts mean for the Lady Spartans? “It’s awesome, it’s a little indescribable, I was just telling (assistant coach) Ted (Fabiano) ‘on my gosh, we did it, we got it, we’re here,’” said an elated Berthoud Head Coach Hanna Grow-Morales. 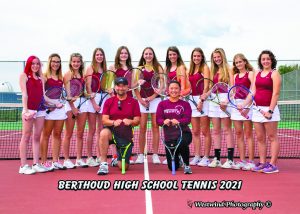 She continued, “All the work the girls put in, we practice every single day, we’ve practiced since February, they are willing to put in the effort and that makes it that much easier to be out here every single day. I feel like they deserve this and you don’t get to say that about many things in life, they put in the work and they got themselves here. I’m so happy we were able to do this as a team.”

The Lady Spartans finished the regular season 8-1 overall and 6-1 in league play, the only defeat coming to always-tough Thompson Valley on May 20. Berthoud cliched the win on Tuesday afternoon in central Greeley, playing at the Centennial Courts against University High School, who the Lady Spartans dispatched with ease, winning six of seven lines.

Senior Gretchen Marty accepted a tacit forfeit (6-0, 6-0) in one singles, yet took the time to volley with Elle Richardson, who could not play a standard match due to injury. Berthoud’s other two singles lines, held by sophomores Holly Jaros and Nicolette Marty, took care of business with Jaros defeating Mariah White 6-0, 6-0 in two singles and Nicolette winning 6-2, 6-0 in three singles over Abby Marion.

As impressive as the team’s overall success, an extra feather in their cap had to be play of the one doubles line of junior Sydney Hocker and sophomore Kendra Maitland, who finished the regular season a perfect 8-0. The pair put an exclamation point on their undefeated season with a 6-2, 6-2 win over University’s Chloe Martinez and Gracy-Anne Long on Tuesday.

Finding the right mix for each doubles line was a focal point for Grow-Morales and Fabiano at the beginning of the season. As Grow-Morales explained, “During tryouts we did a lot of swapping, interchanging partners, and honestly it was a lot of personality match too, when you’re on the court with your doubles partner, if you don’t have that cohesion on the court, it’s not going to bode well for matches and it’s not going to help us as a team.”

Teaming Hocker and Maitland quite clearly worked to perfection, as did teaming up Alana Hymel and Lyndsey Pancost for the two doubles line; the latter pair won all four of their matches together as a team.

“Sidney and Kendra, they both have great serves, Kendra is very active and she’s very tall so she’s all over the net and Sidney has great hands, she keeps the ball low and they just complement each other very well,” Grow-Morales said of the one doubles line and commented on the two doubles team,  “Alana and Lindsey have great energy and are both very positive and that helps their games up a lot, they just set each other up very well and that’s what we look for in doubles, how can you guys help each other on the court not just skill set wise but emotionally and mentally, because that’s a huge part of the game.”

Cliched as it may sound, enjoying the sport itself and enjoying the camaraderie created as a result, plays a big part in team success in any sport, at any level, and this Lady Spartans squad is no different. “Thankfully and luckily, our girls are very fun and cheerful and good spirited which made it easier, it was great. They all want to be out here and have fun together,” Grow-Morales stated.