Josie Spitz prepares for her third and final pole vault attempt at 10-feet, 9-inches at the Max Marr Spartan Classic on April 11. Spitz won the event in a jump-off at the same height.
John Gardner / The Surveyor

Coming down to the third and final jump between Poudre’s Mia Moret and Berthoud’s Josie Spitz, at 10 feet, 9 inches, Spitz looked at Moret and told her “good luck” as Moret stepped up onto the runway.

Moret ran down the runway, vaulted her way above the bar and clipped it on her way over, leaving Spitz with an opportunity to take the pole vault event in front of the hometown crowd at the Max Marr Invitational at Berthoud High School on April 11.

Moret missed her final jump by very little, as well, so did Spitz. But that sent the two into a jump-off at 10’-9” and created a little tension in the finals. Moret missed her first attempt, but Spitz soared above the bar to take first place in the event for the fourth time this season.

“I was more excited,” Spitz said of the jump off. “I knew I could get it on my last one because on the third attempt I was super close; I just blew through it. I knew if I had a chance to move back I could definitely get it.”

Despite the win, Spitz was eager to try and clear 11’-3”, narrowly missing what would have been a new personal best.

She may not have reached that goal on that particular day, but you can bet that it’s still in her reach.

“I was more confident than anything,” Spitz said of her final attempt.

With the win, Spitz has finished in first place in four out of six high school competitions she’s competed in this year; finishing in second place in the other two. Berthoud teammate Kelly Chamberlain has also done especially well this year in the event, placing third at the Max Marr Invitational, it was her third, third-place finish of the season. Chamberlain also has a fourth and sixth place finishes at two other events as well.

But for Spitz, the competition was more with herself, and getting that person record, than with the other 22 competitors in the field. 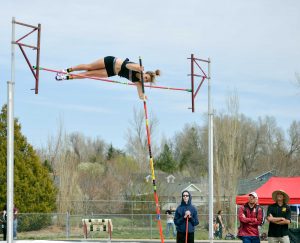 Josie Spitz clears the bar at 10-feet, 9-inches in the jump-off against Poudre’s Mia Moret.
John Gardner/ The Surveyor

Both Moret and Spitz train together at Above the Bar Pole Vault club in Boulder. So, while competing against one another may be new, compiting together isn’t.

“I know Mia well,” Spitz said. “And it would have been a PR for her as well, so I was kind of rooting for both of us.”

Pole vaulting is as much an individual sport as it is competing against yourself, Spitz said. She also said that she’s not as competitive with the others in the field as she is with herself.

“I like having the support of everybody and supporting them, too,” she said, “because we all go through the same thing every day.”

She began her vaulting career after a friend encouraged her to give it a try her freshman year.

“I was like, ‘I don’t want to run circles around a track,” Spitz admitted.

In her junior year, Spitz has been vaulting for three years and is currently ranked sixth in the state. The former gymnast’s form is fluid and relaxed, but it’s taken a lot of hard work and dedication to get to the level of competition that she’s at, said her mother, Lisa Spitz.

“She’s progressed and gotten better and better over the years,” Lisa said. “It didn’t come naturally to her; she’s put in a lot of time.”

Last year, as a sophomore, Josie vaulted her way to the state track and field meet for the first time.

“I think I was more nervous because I made all my jumps on my third attempt,” she said. “It was fun, though.”

This year her goal isn’t making the state meet specifically as much as it is getting over the bar at the high 11-foot mark.

“I know I can do that,” she said. “I want to go as high as I can go; whatever happens with this season, I’m good with.”