In normal years, the first weekend in May would have the track team racing for the conference title. However, in this pandemic year, this past Friday was the season opener. The April through June timing of the 2021 track season has caused some athletes to forgo the sport this year, but it is also affording athletes more opportunity to extend the competitive season without most of the Colorado wind and snow of early spring.

Freshman Paige Farnam broke Ashley Prescott’s record in the 400 meters by 0.09 almost nine years to the day. Prescott ran 59.58 seconds and was one week away from placing fourth at the state meet back then. Farnam broke the record in her first high school meet. Farnam also won the long jump with a 16’7” leap. Farnam ran legs on the 4 x 200 and 4 x 400 relays. She’ll be one to watch. 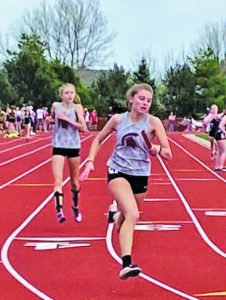 Photo by Kristi Leonard Freshman Faith Frisby was part of the 4×800 meter relay team that set a new school record at the R2J Invitational last Friday in the season-opening meeting in Berthoud.

The girls 4 x 800 relay team of Faith Frisby, Ally Padilla, Jaycee Williams and Olivia Krueger set a new school record of 9:56.72. The previous record of 9:58.16 was set at the state meet in 2013 by Emma Degnan, Annika Jessen, Kristina Cavey and Kiah Leonard.

BHS girls placed fourth in both the 4 x 100 (Adrianna DeGualdo, Gracie Flores, Sierra Pirkey Kenner) and 4 x 200 (Frisby, Davidson, Farnam, Kirkpatrick) relays and took fifth in the 4 x 400 (Frisby, Kirkpatrick, Krueger, Farnam) relays. Bella Miller (2:51) placed sixth in the 800 meters. Ellie Sundheim, the only senior to compete for BHS, added two points to the team score with her seventh-place finish in the 3200 meters (12:57). Izabelle Froien just missed earning points for the team in the discus (76’2”), with her ninth-place toss.

Easton Armitage, a sophomore, placed fifth in the discus with a throw of 115’0”. The rest of the team points for the boys would come from the relays with seventh place finishes in the 4 x 400 (Wyatt Schmidle, Evan Torres, Derek Rennaker, Michael Tatum) and 4 x 200 (Cody Croft, Scott Vanderwall, Hosier, Tatum) relays. The 4 x 100 relay (Croft, Torres, Hosier, Tatum) finished in eighth place.

Although only one athlete scored points in the throwing events, Voth was proud of his squad of throwers. “Armitage, Froien, Gracie Flores, Kaitlynn Parson, Kaiden Sandvik, Taylor Lundgreen and Everett Peatrowsky did not get to throw last year. They are all freshmen or sophomores except for one (Sandvik is a junior). They came out and competed well.”

Voth added, “Great leadership from Kam Hosier and Michael Tatum.” Both boys were instrumental in the relay success and providing guidance to the young team.