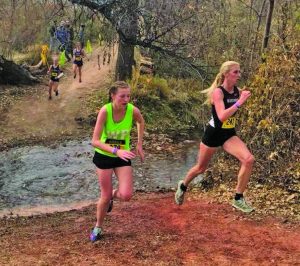 Photo by Dylan Carder – Berthoud’s Cailey Archer (right) powers out of the water crossing
at the state meet last Saturday, passing a number of runners on her way to the finish line.

Berthoud High School’s (BHS) assistant cross country coach, Jordan Jennings, was not even born the last time BHS sent a full boys team and a full girls team to the state meet. BHS celebrated this landmark with a rally at the school, complete with the band playing as team members walked out to the bus. The fire department escorted the athletes out of town. Once in Colorado Springs the team ran through the course, discussing race strategy.They knew they would face the best in the state in the toughest race of the season on Saturday.The boys race was the first off. With a band of supporters from their hometown, the Spartans were ready to give all they had on the course.The pace of the race was very fast. Coming through the first mile in 5:27, Kade Leonard was in 69th place and 10 seconds out of 25th place, to illustrate how tightly matched the teams are at the state meet. Berthoud’s team was tightly bunched with each other as has been the modus operandi for the boys team all season. At the two-mile point, Leonard was in 80th place. Noah Burtis followed 11 seconds behind Leonard in 99th place. Eli Greenslit was six seconds back in 111th, and two seconds later, Jonathan Wyrwas passed in 114th place. Berthoud fans only had to wait another 25 seconds for the rest of the Spartans; Siler Stein, Kyle Conlon and Kevin Sethre, to pass by. Coming into the stadium, the fatigue on the faces of the runners was evident. Two runners from Faith Christian had fallen in the final 50 meters from exhaustion on the difficult course. One of those runners would be passed by over 50 people before finally stumbling to the finish. Assisting a competitor is no longer allowed by CHSAA rules, so stopping to help him was not an option. Leonard raced toward the finish line, trying to break 18 minutes on the challenging course. The junior finished in 72nd place with a time of 18:01. Burtis finished in 97th place in 18:17, achieving his goal of a top-100 finish. Freshman Greenslit was 106th place in 18:25. Juniors Wyrwas was 114th in 18:32 and Stein 133rd in 18:53. Sophomore Conlon placed 137th in 18:59 and senior Sethre was 142nd in 19:10. The team placed 18th in team scoring.“Kevin and I have had a goal of making it to state since freshman year,” beamed Burtis, “We did great!” As soon as the boys returned to the team camp, the girls had to head to the starting line. The girls lined up in the middle of the field, which meant they would have a better pass through a narrowing about 150 meters from the start than the boys had. However, maintaining positioning when everyone is converging toward the middle makes the start tricky. The race plan for most of the girls was to start out conservatively and pick people off on the hilly section of the course. Cailey Archer had something to prove this year. A medical problem led to her finish in last place in 2016. However, this year the junior was out to make a statement. More commonly known as a sprinter and high jumper, Archer led the Berthoud girls team from the very beginning. She ran almost eight-and-ahalf minutes faster this year to place 88th with a time of 21:35. Senior Maycee White and freshman Ellie Sundheim spent the first two miles close enough one could get both of them in the same picture frame. However, shortly after the two-mile mark, Sundheim felt an excruciating pain in her side, forcing her to slow down. White crossed the finish line in 107th place with a time of 22:13, but Sundheim fell back to 136th place, finishing in 23:50. Sophomore Alex Schultz was Berthoud’s third finisher in 127th place in 23:08. Seniors Alyssa Radloff and Liz Bosnich were separated by only three seconds as they finished their last high school cross country race in 133rd and 134th in 23:37 and 23:40, respectively. Both girls had run over 26 minutes on the same course in August showing a nice improvement in just two months. Julianne Evans Dennison was not far behind in 139th place in 23:57 with over 90 seconds improvement from her time last year. Berthoud’s girls finished in 20th place.Ten of Berthoud’s harriers will travel to Arizona in a few weeks to race against the top runners in Colorado, Utah, Nevada, New Mexico and Arizona at the Nike Cross Southwest regional meet. The course will be flat, fast, and at lower altitude, so season-best times should be the norm for the team.The top-two teams at NXR SW earn an all-expense paid trip to the Nike Cross national meet in Portland, Ore.