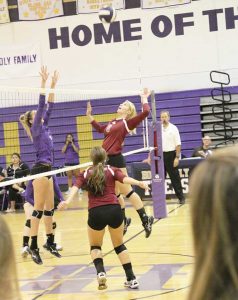 Berthoud setter Jessa Megenhardt goes up for a kill during the contest against
Holy Family on Tuesday in Broomfield.
Paula Megenhardt / The Surveyor

If there is such a thing as a big early-season win, the Berthoud High School volleyball team certainly got one Sept. 6 on the road against Holy Family. Berthoud bested the fifth-ranked and defending league champion Lady Tigers by a 3-1 final score (25-19, 27-25, 12-25, 25-17) to kick off their Tri-Valley Conference (TVC) schedule in style.

“Holy Family is a team we have a high amount of respect for and we knew we had to play crisp volleyball,” Berthoud head coach Daisha Agho said. “We did a phenomenal job of not letting them go in runs of more than two or three.”

Berthoud’s ability to play tight defense has prevented opponents from being able to string together long scoring rallies, putting Berthoud back in system where their serve and attack can do damage on the scoreboard.

“Tonight our defense was very disciplined, allowing us to see some great things on the offensive side of the ball,” Agho said.

A pair of adjustments to Berthoud’s alignment proved key. Holy Family game-planned for Berthoud outside-hitter Julie Ward and had success with their block against the 5’10” junior. Ward was shifted toward the center and found more success, ending the night with a team-high 21 kills. Additionally, as Agho explained, “Kailey Berry was a huge asset on the right side for us making the switch from outside where I had her to start the season. She had several clutch kills, especially in the fourth set.”

Berthoud’s team chemistry is a strength Agho and the players have boasted about since the beginning of official practice in mid-August. “We’re cohesive as a team and know what we need to do in order to beat a tough team … we made smart decisions as a team,” said setter Jessa Megenhardt. The senior continues to turn in one All State-caliber performance after another; Megenhardt tallied five aces, four kills, 20 digs and 35 assists in the four-set victory.

Berthoud competed in four matches at the Regis tournament on Sept. 3 and 4, winning their first two matches of the weekend but then losing both on the second day.

Saturday’s matches featured tougher opponents; Berthoud first faced off with an out-of-state team, St. Teresa’s Academy from St. Louis Mo., who handed the Lady Spartans their first loss of the season with a 3-0 sweep (25-18, 25-19, 25-16).

“We were pretty evenly matched. The difference was ball control,” Agho said of the match with St. Teresa’s. “We struggled to get the ball to Jessa and in turn were not in system enough offensively to come out on top.”

In their final match of the weekend, Berthoud came up on the short end against Thomas Jefferson, a team the Lady Spartans swept on their way to claiming the 2015 Regional Championship. Berthoud pushed the match with Thomas Jefferson to the maximum five sets but ultimately lost 3-2 (25-12, 22-25, 25-23, 23-25, 13-15).

“[We had] too many unforced errors and mental mistakes to get us over the edge,” Agho said of the loss to Thomas Jefferson. But the coach spoke glowingly of the quartet of freshman on her team.

“Kudos to freshman Teagan Holmes and Sophie Kathol for their front-row play. Their youth continues to be a non-factor. Also true for Cas Berry and Trinity Penny who kept us in these with clutch serving and defense.”
Berthoud (4-2, 1-0 conf.) travels to Erie on Sept. 8 before returning home to host Skyline and Mead for a pair of TVC matches on Sept. 13 and 15, respectively.