A nearly two-week layoff in the middle of the season did not appear to have any adverse effect on the Berthoud High School (BHS) volleyball team – at least initially.

Berthoud hosted Tri-Valley Conference opponent Frederick Tuesday evening and thoroughly dominated the first set, winning 25-9. After that, however, it was a different story. Frederick made some adjustments and won three of the final four sets to take the match 3-2 (9-25, 25-18, 20-25, 25-20, 15-9). 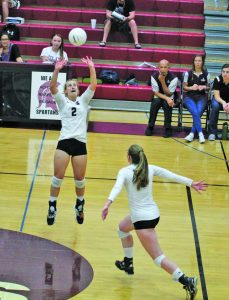 In the opening set the Lady Spartans jumped ahead quickly, building an 8-3 lead, thanks in large part to three serving aces from sophomore Logan Nissen. It appeared it was going to be an early night and the visiting Lady Warriors would be getting on the bus for Frederick before the clock hit 8 p.m. Trinity Penny then went on a three-ace streak of her own later in the set, pushing Berthoud’s lead to 20-7. A kill from Sophie Kathol clinched the first set for Berthoud, 25-9.

After the teams swapped sides of the net Frederick appeared to become a totally different team. From the start of the second set on, the Lady Warriors demonstrated excellent ball control, savvy attacking, and had great court coverage that prevented Berthoud from assembling any long-scoring runs. Furthermore, the Lady Spartans appeared to suffer from communication break-downs at times

“Frederick came in wanting to play well and they were controlling the ball. They were getting the ball where they wanted it to go; they kind of were catching us off-guard defensively, and we had some communication issues,” Berthoud Head Coach Mil Santos said after the five-set match.

Frederick built an early lead to open the second set, first 6-1, then 8-2, then 9-4. A kill from senior Kailey Berry, one of her team-high 13 on the night, and an ace from Calli Taylor gave Berthoud their first scoring run since the first set, yet Frederick remained in control. Berthoud would score on back-to-back plays only once for the remainder of the set as Frederick took the second set comfortably, 25-18.

Berthoud got off to a better start in the third set and led 6-3 before the match turned to a back-and-forth affair where each point for one side was followed by a point for the other. With the set knotted at 19-all, Berthoud junior Teagan Holmes worked back-to-back kills from her middle-hitter position and the Lady Spartans took the set by a 25-20 final, the winning point coming on a kill from junior Taylor Whittet.

The back-and-forth nature continued in the fourth set with Frederick pulling out to an ever-so-slight lead, 14-12. Some unforced errors and communication troubles dogged Berthoud as Frederick pushed their lead to 20-15. Junior Cas Berry, who paced Berthoud on the night with 20 assists and 19 digs, got an ace that was followed by a kill from Kathol that got the Lady Spartans within striking distance, 22-19. But a pair of kills sandwiched an ace and Frederick got the 25 points first.

After taking the fourth set, Frederick appeared to have all the energy and momentum and took care of business in the decisive fifth set. The Lady Warriors were in control from start to finish, building a quick 6-1 lead, extending it to 12-4 before finishing things off in a 15-9 final score.

“They made some adjustments there, had some different people passing the ball. They were able to get the ball into areas where they could make plays and we were not able to do that,” Santos said. “It was a lot of back-and-forth, so we had a lot of unforced errors that kept us from getting momentum. We never got the momentum; their ball-control was what got them over the top tonight.”

Berthoud (5-3, 0-1 TVC) will travel down to Broomfield to take on Holy Family (5-4, 1-0 TVC) Thursday night for their next match. The Lady Spartans will welcome rival Windsor the BHS gym on Tuesday, Sept. 25.