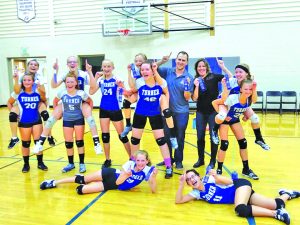 Courtesy photo – The Turner Middle School eighth grade volleyball team celebrates after winning the league championship. The Lady Dragons beat Severance in straight sets, 25-15, 25-22, to secure their second title in as many seasons

It takes a special team to win a championship. Not only does the team need raw talent and a good coaching, they need grit, gumption and mental fortitude.

The Turner Middle School (TMS) volleyball team has all of those things. In spades.

“I think what I would say is that this was not the most talented group of kids I’ve coached but it is the best team I’ve coached because of the way they fought for each other, and never gave up and took home championships in two different leagues,” Head Coach Paul Farus said. “It shows everyone just how much of a team this group of kids (is) and the community spirit they’ve brought to TMS volleyball is special!”

This year’s eighth grade class won their league title as seventh graders last year and in the two seasons the team has combined for an extraordinary 22-5 record, with a 9-1 mark in 2017. The Lady Dragons opened the 2017 with a loss but, in words of Farus, “worked out some kinks,” and then went on to win their next six regular season matches before sweeping through the three rounds of the league tournament.

The team’s ability to respond to adversity, not only over the course of the season but in individual sets and matches as well, was the key ingredient in taking home the conference title. It was something Farus remarked explaining the team remains even-keel when faced with challenges, whether that be losing a point or finding themselves trailing, even by a wide margin, in a match. It’s a trait not common in junior high sports but, as Farus explained, his team is a special group that brings the mentality, “we lost that point, oh well let’s get the next one.”

The championship match against Severance was a prime example. Early in the first set, Turner trailed 11-6 but was then able to rattle off 16-straight points with libero Allison Walker serving to take command of the set, 22-11. Not all but many of Walker’s serves resulted in aces for Turner. In the decisive second set, the Lady Dragons trailed throughout, though never by a wide margin. Turner pulled to within two, 22-20, when Ellie Mead went back to serve. Mead would rattle off three aces and a pair of errors on Severance’s part clinched the championship match for Turner. Emma Genger led the Lady Dragons in blocks, Alexis Creager paced Turner in kills while Waller led the team in both in digs and aces.

As all championships squads are, Farus explained that his is a special group, with an established identity, smarts, savvy and excellent chemistry. He said that every player on the roster contributed something meaningful in key moments throughout the season. The group has a bright future ahead and it is the group’s intangible qualities – their mental toughness, resiliency and internal rapport – that are their greatest assest.

Said Farus, “They will be missed next year here, but they will contribute great things to the (Berthoud High School) volleyball community!”