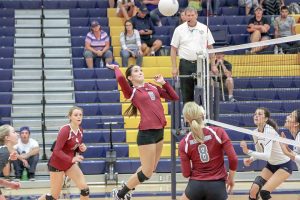 Berthoud’s Emily Trujillo, center, goes up for an attack against Frederick at Frederick High School on Sept. 22 as Sarah Howard, left, and Jessa Megenhardt cover the court. The Spartans’ victory extended their winning streak to five and lead the Tri-Valley Conference currently.
Paula Megenhardt / The Surveyor

Persistence pays off. And the Berthoud High School (BHS) volleyball team is a prime example.

The Lady Spartans entered the season as a team on the upswing but, unlike the 2014 season, not one that was going to catch any of their opponents off guard. This fact was well known to Head Coach Daisha Agho and her staff, as well as her players. Thus Agho and the team spent the preseason and early part of the season working on the little things and on defense, knowing their ability to score would not be an issue.

Thus far the preparation has paid off, as the Lady Spartans have won five consecutive matches, besting Tri-Valley Conference (TVC) rivals in each and every one and finding themselves sitting atop the league standings with a perfect 5-0 conference record.

The Lady Spartans were able to overcome Roosevelt’s near-perfect serving percentage of 97.2 percent by getting the better of their opponents in blocks, 17 to three in Berthoud’s favor, and digs, 170 to 159.

Berthoud took the win over Roosevelt, who in their previous two matches had beaten respectable TVC adversaries in Windsor and Erie, and expanded upon it by beating conference rival Frederick 3-0 in dominating fashion: 25-13, 25-11, 25-15 on Sept. 22. The Lady Spartans win was all the more impressive considering Pierick, a middle hitter, was unavailable for the game due to illness. The junior is second on the Berthoud squad with 65 kills and third with 11 blocks.

“Emily Trujillo did a great job in the middle tonight, replacing Shaylee Pierick,” said Agho. “I’m really lucky to have such versatile players that can adjust easily to any situation.”

Junior Sarah Howard, who has been steadily emerging as a key player for the Lady Spartans, recorded team highs in both kills (10) and digs (12) on the night.

“Julie Ward and Sarah Howard were effective on the outside and Jessa [Megenhardt] was smart about her ball placement setting,” said Agho.

Megenhardt had 23 assists, nine digs and four kills in the win.

“Overall I’m really pleased with our performance in tonight’s match,” Agho said. The team is starting to find their groove and played really aggressive tonight.”