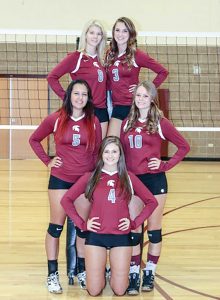 Sometimes only witnessing something first-hand will do.

The Berthoud High School (BHS) volleyball team – one that in both of the last two seasons has claimed the regional championship and participated in the 12-team state tournament – quite possibly experienced that lightbulb-above-the-head realization this past summer whilst competing in a match at a camp at the University of Northern Colorado (UNC).

As explained by Berthoud Head Coach Daisha Agho, the Lady Spartans were in awe of the on-court communication and roster-wide discipline displayed by the reigning 3A state champion contingent from Eaton, whom Berthoud’s team bested in the exhibition tilt at UNC.

“It’s all mentality,” Agho explained. “I told them, ‘you guys realize this stuff you’re talking about are things you have control over; if that’s the kind of team you want to be, all it takes is a few little things and some discipline … and you can be that team that everyone else is in awe of.’”

The Lady Spartans return a largely-intact squad from last season that is hungry to not only make a return trip to state, but to advance beyond the round of pool play from which they have been eliminated the last two seasons.

“We’re sick of being knocked out in the first round,” said senior setter Jessa Megenhardt, whose 842 assists and 59 aces paced the Tri-Valley Conference (TVC) last season. “We want to be there for the next phase and into the championship … we’re going to take it farther than the last few years.”

Junior outside hitter Julie Ward, who led Berthoud with 307 kills in 2015, agreed.

“I think we all are really confident and want to get back [to state] and obviously get past the first round of pool play,” Ward said. “I think that’s our biggest goal, and I know it’s Coach’s biggest goal.”

To the player, the Lady Spartans maintain the team will be improved over last season on account of their improved on-court − and off-court − chemistry. As senior middle Shay Pierick explained, “Our teamwork is really big this year, just the way we carry each other; we’re not going to have any girls who turn their back to the team.”

The team chemistry concept is one on which Agho has placed a great deal of emphasis. “You win and lose matches off the court,” Agho said. “If you’ve got girls who can’t handle themselves off the court you won’t have cohesiveness on the court; when you step on the court, when you step in this building, you’re a family. And this group really does a nice job of making sure everyone is included and everyone is involved.”

“We have much more chemistry now, there’s less drama, we’ve done a lot of bonding,” Megenhardt said. “Over the summer we played a lot more together, so our chemistry is a lot better this year, so I’m really excited for that.”

In addition to Megenhard, Pierick and Ward, the Lady Spartans return seasoned players in seniors Sarah Howard and Brooke Thonoff, and junior Kailey Berry, all of whom played at least 72 sets in 2015. In addition, Berthoud welcomes a handful of freshman who, while green when it comes to high school volleyball, have already developed an on-court rapport with their older teammates through club play.

“This group just automatically meshed from the moment we were all put on varsity together,” Pierick explained.

“We don’t treat them like freshman … we make sure they know this is their court too,” Megenhardt said when asked about the team’s new-comers.

Said Ward, “I can relate to them a lot, I know it’s really scary coming in with upper classman … we just had to bond with them off the court and then the dynamics came together on the court.”

While Berthoud returns much of last year’s team, the libero spot is one critical position the team is currently working to fill. The defensive specialist who remains in the back row at all times was vacated by now-graduated Haley Hummel, who led all of Class 4A with 717 digs in 2015. Agho said she and her staff have not yet made a final decision on the position but, “we’re looking at a few … trying to find who can best fit back there.”

Even with the team’s primary libero yet to be determined, the Lady Spartans believe in their aggressive approach on offense.

“We’ve really got some powerhouse hitters,” Agho said – a sentiment that was echoed by Megenhardt, Pierick and Ward. And team chemistry will take the team a long way.

Berthoud opens the season at home on Tuesday, Aug. 30, as they welcome Greeley West to the BHS gym for a non-conference match that is set to begin at 6:30 p.m.