For 11 months of the year, six days a week, Berthoud High School (BHS) swimmer Corinne Roberts is in the pool. The freshman puts in 18 hours per week working on her strokes, developing stamina and building strength. That is 864 hours a year and that dedication has already paid off.

Roberts, in just her first three meets as a member of the BHS swimming and diving team, has brought home six first-place finishes, four more second-place finishes and has broken the school record in the 100-yard breaststroke race. 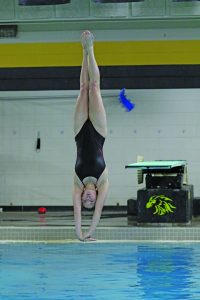 Photo by ACP Media – Berthoud’s Kayleigh Schanker enters the water in near perfect form in the 1-meter diving event earlier this season.

Technically, Roberts has broken the 100-yard breaststroke record twice; in her first meet on Dec. 2, she clocked in at 1:12.23, breaking the record set in 2019 by two-time state champion and 2021 Surveyor Athlete of the Year Jamie Dellwardt. And then this past Saturday, Roberts turned in a time of 1:11.19, breaking her own record at the Berthoud High Break the Ice Invitational held at Mountain View High School in Loveland.

She is also within two seconds of the BHS record in the 100-yard butterfly; her season-best time of 1:06.76, set this past Saturday, is rapidly approaching the school record of 1:04.63, held by class of 2021 graduate, Kysa Keck.

“I can do anything my team needs me to, I personally prefer the breaststroke but I haven’t had a chance to do that in the 200 medley, I’ve done backstroke mostly, but I’m really excited to be a part of it,” Roberts said. Competing for her high school team is something she has looked forward to for some time. Her older sister, Hannah, was a member of the inaugural BHS team in 2018 and competed throughout her high school career.

“It’s really fun because you get to see each other during classes, and during passing periods, and it really helps build bonds and it’s so much fun to have that energy and be a part of it,’ Roberts said. “A lot of them are my friends, I’m really grateful for them, they get me going no matter what and I get to the same for them.”

As a team, Berthoud took sixth place in the 11-team Berthoud High Break the Ice Invitational on Saturday at Mountain View. It was the Lady Spartans’ first time hosting a meet and, in addition to providing a nice fundraising boost for the program, it gave the team it’s first chance to compete in a large field of teams from the Northern Colorado region.

While Roberts was the only Berthoud swimmer to bring home a gold medal – she defeated Annika Sesselmann of Silver Creek by almost six seconds in the 100-yard breaststroke race and finished second in the 100 fly by less than half a second to Liberty Common’s Megan Zupancic – multiple Lady Spartans turned in strong performances.

The Lady Spartans will be back in the pool at the Mountain View Aquatics Center this Friday when they will compete in the R2J City Meet.