Ponderosa, Longmont too much for Berthoud at state 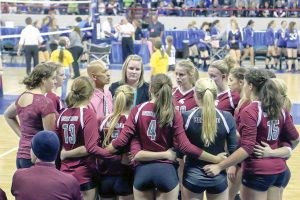 Even with the less than ideal finish, the Lady Spartans fully recognized that their goal of making a return trip to state had been realized. Junior setter Jessa Megenhardt called the season “amazing” and said that getting bounced out before the semifinals would only serve to fuel the teams’ returning players for next season.

Having lost to Ponderosa on the opening day of pool play, Berthoud could do nothing but hope Longmont would pull off an upset later on and give the Lady Spartans a chance to advance to the semis. Yet when Ponderosa swept Longmont just as they had Berthoud earlier in the day, Berthoud was consigned to the fact that the next day’s match, their final of the season, would be for nothing but pride.

It is as an unenviable position in which a team and their coach can find themselves. And while the end result was a sweep at the hands of Longmont, Berthoud head coach Daisha Agho said she was proud of the way her team approached their final game of the season.

“It was great, they were excited, they love each other as far as a group goes and being able to play together on the court again in a big setting like this was just a real honor for them,” Agho said when asked about her team’s morale entering the final math of the year. “I’m very proud of my girls for sticking with it and playing hard and keeping their heads up.”

Berthoud was able to take and retake leads at multiple points throughout the match with Longmont. Unlike they had done the previous day, the Lady Spartans made a point of getting the ball to sophomore outside Julie Ward early and often, whose power in attack helped propel Berthoud to an early 10-5 lead in the first set.

Yet Longmont was able to withstand Berthoud’s onslaught and at one point in the second set reeled off 10 straight points to transform a 15-9 deficit to a 19-15 lead. Longmont outside Sydney Wetterstrom tallied 13 kills and two blocks in the three-set match.

“We were just fighting hard, she was a tough hitter and maybe we could have lined up with her better but ultimately she was just an amazing hitter,” Megenhardt said of Wetterstrom after the match.

Berthoud did battle back, a kill from Ward and an ace from senior libero Haley Hummel, her second of three on the afternoon, got Berthoud to within one, 19-18, but Longmont pushed back, taking advantage of some mistakes on the Lady Spartans’ side of the court to win the second set.

In the third and final set, after knotting the score at 12-all, Berthoud was unable to match Longmont point-for-point, and consistently found themselves playing catch-up and never able to retake the lead. An ace from Shaylee Pierick tied the match at 22 but Longmont held on for the narrow 25-23 win.

“Our block not staying closed and then them just going over the top on us … little things like a lot of unforced errors on our part didn’t help,” Agho responded when asked what made the difference in the match.

Even though the final result was the same, the match with Longmont was far crisper than the previous day’s with Ponderosa. Berthoud appeared to have trouble communicating and the three-seed Lady Mustangs were too much for Berthoud to handle.

The state venue, with five matches being played simultaneously, proved to cause some on-court communication problems for the Lady Spartans. Asked about that, Hummel said, “I think that it did because we normally communicate well. When we’re in a big gym with all five courts going and it’s just super loud, you can say stuff but you’re not going to get heard; it’s a little bit hard to re-group. That definitely made a difference on the team.”

Agho agreed, saying, “Nerves got to them a little bit I think … defense and communication, we weren’t talking, we’ve got to play smart in volleyball and we didn’t do that tonight.”

Berthoud overcame a mid-season four-game losing streak, beating Windsor in a do-or-die match in late October and won their second-straight regional title. That, not getting swept at state, is what Megenhardt believes will define the Lady Spartans 2015 season.

“We had a little tough patch in the middle but we came back stronger and better,” Megenhardt said. “We just all realized that this is our only season as this team and we had to stay together.”