There are steps forward and then there are big steps forward. In thoroughly dominating Niwot on Sept. 25 at Everly-Montgomery Field in Longmont, the Berthoud High School (BHS) football team took, in the words of Head Coach Troy Diffendaffer, “a huge step forward.” 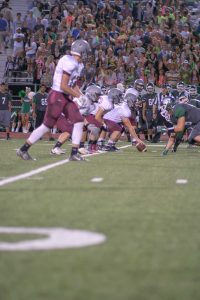 The Spartans’ offensive line (from left) seniors Lucas Czarnecki, Stephen
Lockard, Jamie Gray, junior Ben Douglas and senior Brendon Stanley have been
a force this season on the gridiron.
Jan Dowker / The Surveyor

The Spartans rained on the Cougars’ homecoming parade with touchdown after touchdown, taking a 34-point lead into the locker room at halftime and ultimately cruising to a 41-0 final to notch their first Northern League win of the season.

“We took a huge step today … we played a clean game, things were clicking for us, we had the offense going, the defense going, the special teams going, and we’re not shooting ourselves in the foot, it was a nice game,” Diffendaffer said.

The dagger for the Cougars came just before the end of the first half. Berthoud took possession on their own 38-yard line with just 32 seconds remaining on the second-quarter clock. Perhaps Niwot expected the Spartans to run out the clock and take a 27-0 lead into the locker room.

The Spartans, however, had different plans.

Lining up in a trips left formation, Berthoud quarterback Cody Braesch took the snap out of shotgun while receiver Jackson Hall moved backward, feinting that the Spartans were setting up a wide-receiver screen. But Braesch’s backward pass bounced off the ground, coming to rest near Hall’s feet. Hall shrugged his shoulders, hinting that it was a busted play. Hall then picked up the still-live ball and fired it 30 yards down the sideline to tight end Cally Castles, who caught the near-perfect spiral and galloped into the end zone 20 yards from the nearest Cougar defender.

“[Offensive Coordinator] Mike [Drake] made a great call from upstairs there, we decided to take a shot,” Diffendaffer said in explaining the decision to call the trick play at the end of the first half.

The 62-yard trick play touchdown was Castles’ second trip across the goal line on the night − the sophomore capped off a two-play, 90-yard drive with a 50-yard catch and run on the Spartans first possession of the second half to give Berthoud a 41-0 lead and kick into effect the running-clock mercy rule. Castles led Berthoud with 174 receiving yards and three of his four receptions went for scores.

“It was something we’ve talked about a little bit and practiced a little bit but going into half there with limited time on the clock we decided to run it and it worked out,” Braesch said. “It’s kind of one of those things where you just have to go out and do it as best as you cane and hope it works out, and thankfully it did.”

Even with the 62-yard Hall-to-Castles score on the trick play, Braesch still finished the game with a 267 passing yards with two touchdowns and 35 rushing yards and another two scores. The senior gunslinger’s 146.3 passer rating was his best mark on the season.

While Berthoud put the game out of reach on the trick play, it was the Spartans’ defense that scored its first points of the game and set the tone for the evening.

Midway through the first quarter, with the score knotted at zero, defensive end Steele Castles and outside linebacker Jimmy Fate put pressure on Niwot quarterback Blake Montgomery, forcing a rushed throw that was deflected by Berthoud linebacker Jamie Gray and into the hands of John Koclanes. The senior returned the interception for a score, giving Berthoud a 7-0 lead with 4:07 left on the clock.

“That pick-six that John Koclanes had really got us riled up. I think that added some momentum for our team and when we came out on offense we wanted to piggy-back on that,” Braesch said after the game. “When our defense makes plays like that it kind of makes the whole atmosphere for our team a little more relaxed.”

Led by Braesch, the Spartans went on to score on five of their next six possessions before being pulled from the game in favor of getting Berthoud’s second-string players some valuable varsity playing time. Both the first- and second-team defenses for the Spartans did their part, keeping Niwot out of the end zone.

The Spartans’ defense has allowed only seven points through four games this season and is something that Braesch explained helps the offense stay confident even when they experience the occasional bad series.

“The first two drives we had an offense that obviously didn’t go the way we wanted them to, but knowing we have the defense we do, we don’t panic. We know our defense is a very strong defense, but we came into this game and we kind of wanted to show that we have a strong defense and a strong offense and I think we did a great job.”