That Carr to Carr to Carr moment. It was something special. For three Berthoud sisters – Rory, Aidan and Annalise Carr – it happened in their first-ever high school lacrosse match together. 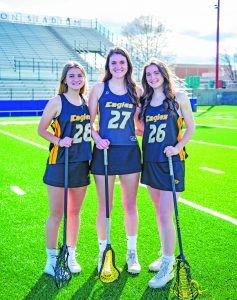 Photo courtesy of Misty Huss – Three Berthoud sisters (left to right) Rory, Annalise and Aidan Carr have shared in the camaraderie of both teamwork and sisterhood as, this year, the three played together on the Berthoud High basketball and volleyball teams and on the Thompson School District lacrosse team, which last week won the league championship

For the three, Annalise, a just-graduated Berthoud High School (BHS) senior, Aidan, a BHS sophomore and Rory, a BHS freshman, this year was one and only. Each member of the Carr trio compete on the BHS basketball and volleyball programs but get to play together on the Thompson Valley High School (TVHS) girls varsity lacrosse team – which draws from all four high schools in the Thompson School District – and this spring won the 4A North Conference crown to earn a spot to play in the state playoffs that begin this Thursday.

“In our first game, it went Aidan to me to Rory to goal, it was the first goal in her (Rory’s) high school career,” said Annalise, who graduated in May and will travel two hours south to the University of Colorado in Colorado Springs on a, you guessed it, lacrosse scholarship. “It’s nice because we all play the same sports but we’ve never played on the exact same team at the same time.”

Sandwiched between an older brother, Rowan, a BHS class of 2019 graduate, and younger Baelor, age eight, the three sisters grew up playing team sports together but gravitated toward lacrosse as their father played it collegiately in Minnesota. Inspired by watching Rowan play, the three joined in the fun, learned the love the sport, and are shining on the field.

“Some of my best memories are going to Rowan’s lacrosse tournaments,” said Aidan, who looks to be a shoo-in for All-Conference (and quite possibly, All-State) honors as she paced the 8-2 TVHS squad in goals (46), points (63), ground balls (62), draw controls (66) and caused turnovers (eight). “When we came of age it was something we just really wanted to do.”

The three feed off one another and credit their familial bonds with much of their success. “What makes us so strong as individual players is being able to go against your siblings, I think the strength that we play against us each other helped us to improve a lot and become strong individually; we all make each other better players,” who finished the regular season third on the team with 34 points, behind her two older sisters, and second in both ground balls (43) and draw controls (19) to Aidan.

“I think it contributes a lot (to our success) … it brings a lot, my stats are because of them; the ground balls are because of Rory’s forced turnovers, my goals are because of Cubby’s (Annalise’s) assists, it all intertwines, all things happen because of each other.” The eldest sister earned the nickname “Cubby,” before she was born, explaining her parents did not like referring to the baby as “it” and thus gave nicknames to each of the five children before their births, but hers stuck. “Even if I was a boy, I still would have been ‘Cubby,’” Annalise said.

While the three have an innate knowledge of each others strengths and weaknesses, both on the field and between their ears, the hours of practice together, on their school teams, club teams and at home, fuel each individually to improve. As Aidan explained, “There’s definitely a difference when you go against your sibling than if you go against another player or another team, there was more competitiveness and more aggressiveness going against Rory in practice and that’s what made us better, the personal ties and the ‘I’m going to beat my older sister’ mentality.”

Improving through competing both with and against one another has paid dividends for the trio not just on the lacrosse field but on the basketball and volleyball courts as well. While the three list lacrosse as their favorite and primary sport, all mentioned that competing in the other two sports serve to make them better.

The improvement, as Annalise explained, comes primarily from drawing lessons that are universal to team sports and applying them across the board. “I look at it as the lessons you learn, I was chosen a captain this year as a senior and I would always use stuff from what (BHS girls basketball coach Alan Gibson) would do, I would use stuff from other sports to help me lead the team, I’d think ‘OK this happened in this sport, how can I use it in this other sport?’ It definitely translates between the sports,” she said.

Rory agreed with her sister and said, “Coaching is a big part of it, you’re coached by a bunch of different coaches so we can translate things. It’s just the IQ of sports in general, making an athlete, not necessarily a specific sport but athletic IQ that helps between all the sports and you translate a lot of it over and it really helps you.”