It was long delayed and will likely to feel too quick to pass, but the Berthoud High School (BHS) volleyball team is embracing the challenge that the 2021 season will present. 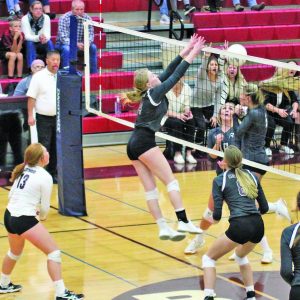 Surveyor File Photo Berthoud’s Alexis Creager goes up for a block in a match last season. The Lady Spartans will begin the 2021 spring volleyball season this week.

Ordinarily a fall sport, volleyball was moved to “Season C” by the Colorado High School Activities Association as a result of the COVID-19 pandemic. The alterations did not end there; Berthoud was scheduled to begin their season last Tuesday, hosting Riverdale Ridge, but the Longs Peak League match was postponed at the last minute due to “a COVID related issue” and subsequently rescheduled for April 9.

Things have been far from ideal and dealing with the upheaval has been the focus of the opening portion of the season. “There has been a lot of stop and go, stop and go, all offseason. We start our offseason and then we get shut down for one reason or another and then we’d start back again,” said BHS Head Coach Mil Santos, who led to the Lady Spartans to the state championship in 2001. “The consistency has been kind of off, so I think that is going to have to be our focus for our season, whenever we get a chance to be in here, we have to try to be as consistent as we can, otherwise it’s just going to be a mess. So that’s been our main thing, trying to make sure we have some kind of cohesion and consistency, but the rust is going to be there.”

Santos was quick to point out that Berthoud’s circumstances are not unique to just them, pointing out that every high school volleyball team in the state has faced the same alterations, delays, cancellations and other adjustments. “We need to make sure we don’t blame anyone for anything, have that ‘why is this happening to us’ mindset because it’s happening everywhere, so if we just stay together as much as possible we’re not going to worry about it and we’re just going to go with the flow,” the coach said.

The break did bring some welcome news as a standout junior libero Allison Waller, an All-Conference and All-State honoree as a sophomore in 2019, who had considered transferring to archrival Roosevelt, elected to remain part of the Berthoud squad. Santos could not have been more pleased, saying, “We felt happy for her because it was a family decision and we certainly supported it but it was hard to try to figure out how to fill that need, for a libero, as good as she was, and we didn’t want to lose her to Roosevelt. So now, of course our defense is that much stronger and our passing will be that much stronger.” Waller recorded 437 digs and 32 aces, both of which paced the Berthoud squad, in the 2019 season.

While Berthoud has only five seniors on their 15-player varsity roster, the team’s youth does not mean they are inexperienced. Sophomore setter Holly Jaros will return this year in the critical court-general role as will experienced front-row players Emma Genger, Logan Nissen, Annalise Carr and Alexis Creager.

Santos expects a strong season, citing the team’s collective experience and adding, “Our ball handling skills have got to be right on and our defense, our top priority has to be defense, because we’re not as big as heighth is concerned, we have be more tenacious defensively.”

With more upheaval likely to come, Santos expressed faith in the mental toughness of his team and said, “If we are able to stay together with all the stuff going on right now and finish out the year without any bad taste in our mouth, it will be a great experience and we will have won,”

Berthoud will have their 2021 home opener this Thursday night when they welcome Mountain View to the Rusty Mathena Gymnasium at BHS.