It was not the result they wanted but the effort, heart and determination were there in spades.

Playing on Saturday at Broomfield Industrial Park for the 4A regional tournament, the Berthoud High softball team lost two of their three games and, as a result, came up just a hair short of their stated season goal of returning to the state championship tourney. 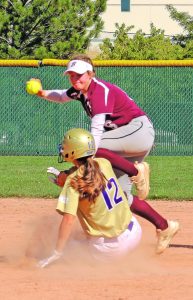 Photo by Angie Purdy Berthoud’s Sierra Pirkey secures the ball on a force out at second base in last Saturday’s regional championships in Broomfield despite the Holy Family’s Makaila Moosbrugger attempting to take out her legs. The Lady Spartans, despite a phenomenal effort in all three games, came up just short and did not qualify for the state championships.

After defeating No. 16 seed Pueblo Central by a 5-4 final in eight innings, No. 17 Berthoud lost 10-0 to host team and 4A No. 1 seed Holy Family to setup a rematch with Central, who defeated the Lady Spartans by a 4-2 final, dashing Berthoud’s hopes of making state.

“It takes me a few days to get over, and I’m still not there, because I’m disappointed for them,” Berthoud Head Coach Buddy Kouns said. “There are lots and lots of positives we can take from this season; I think that as the season progressed, we were playing really good softball at the end of the year and I think the girls worked hard, top to bottom … there was program success this year.”

In the opening game of the day, two plays in the second inning made the score a lot closer than it would have otherwise been. With game tied at zero and two outs already recorded, Central’s Emeri Whiting hit a comebacker to Berthoud pitcher Cemryn Pickett. While Pickett fielded the ball cleanly, her toss to first baseman Lauren Zavednak was slightly offline and allowed Whiting to reach first safely while Leyla Padilla, who walked to lead off the frame, scored and broke the 0-0 tie.

After Hannah Arellano earned a free pass, leadoff batter Nicole Mendoza blasted a homerun over the left field fence to put Central ahead 4-0. Faced with the deficit, Berthoud would be forced to rally. And slowly but surely, they did.

Freshman Mason Premer reached on an error in the third inning and came around to score on a single from superstar junior Gracie Flores. Flores would subsequently steal second, her 29th stolen base of the year, and came home to cut Central’s lead to 4-2 when senior shortstop Sierra Pirkey laced a base hit into the outfield.

Zavednak doubled and scored on a base hit from Mollie McCrea, in to pinch-hit in the fourth inning, and Berthoud would tie the game at four-all in the fifth inning when Pickett, who reached on an error and stole second, scored on a knock from freshman Shealee Spears.

While Pickett dealt with traffic in four of the final six innings, the sophomore showed why is one of the top pitchers in all of class 4A. Timely strikeouts and solid play in the field behind her kept Central off the board. Pickett finished the game with 10 Ks and only three hits allowed.

Savvy managing by Kouns late in the contest was also big for Berthoud. With one out in the bottom of the seventh, Mendoza ripped a double down the baseline to get in scoring position. Kouns then intentionally walked the next two batters, setting up force-outs all the way around the diamond and trusting his sophomore ace. Pickett delivered, inducing a soft pop fly into centerfield and striking out Padilla to send the game to extra innings.

Spears reached on an error to lead off the eighth before stealing second to advance to scoring position. Zavednak laid down a perfect bunt up the first baseline, allowing Spears to reach third. Kouns then put down the signal for the squeeze play, which Spears and Carly Fischer executed to perfection to give the Lady Spartans a 5-4 lead.

Pickett slammed the door in the bottom of the eighth, striking out the first two and recording the third out when third baseman Maggie Langer, as she had all season long, turned a textbook scoop-and-throw to Zavednak to record the 24th and final out, preserving the victory for Berthoud.

The game with Holy Family, a private school that held the No. 1 seed in all of Class 4A, was a tough draw for Berthoud as starting pitcher Isabella Arroyo, a lefthander, did a masterful job hiding the ball right up until the point of release and making it difficult for the Lady Spartans to get any read on the pitch. Arroyo fanned 11 in her six-inning shutout and allowed only three Berthoud hits.

Kouns opted to rest Pickett against Holy Family to assure she would have the stamina for what would be the decisive third game and replaced her with freshman Lilly Dodd, who got the start and worked four frames, and Lucy Flores, who threw the final two.

It was a baptism by fire for the two freshmen, but both equated themselves well. Dodd surrendered just two hits and one run in the first two frames and kept Holy Family off-balance. Four extra-base hits and fielding error did allow Holy Family to score five runs in the next two innings, but Kouns praised Dodd’s “gutsy” performance saying, “she is a gamer, we know it, we saw it, I was proud of how she pitched especially considering who it was (against).”

After Central took care of business in their game with No. 32 seed Denver North, winning by a 9-5 final, the rematch was set.

Berthoud got the board first when Flores, who reached on an error and stole second, scored on a single from Pirkey in the top of the third. In the fourth frame Zavednak doubled and advanced to third on a Fischer single before being replaced with Dodd, who entered as a pinch-runner. Isabelle Guzman, who Kouns said is as good of a bunter as he has ever coached, was tasked with executing another squeeze bunt and Dodd showed baserunning brilliance, sliding into home under the tag.

Yet Dodd’s score would be the final one Berthoud would get. Only four Lady Spartans reached base in the final three innings while Central notched four hits, worked six walks and benefitted from four passed balls to score four runs and earn a spot at state.

What proved to be the final game of the year was a representative, Kouns explained, of a few of the other losses Berthoud suffered on the season. “In four of our losses we out-hit our opponent and in those four games it was little things that added up to a loss, we walked a few girls and we made untimely mistakes, and when you do that, that’s what happens,” Kouns said. “In game three, we out-hit Pueblo Central but we made a couple of untimely mistakes, and we had a couple of untimely base on balls and in a tight game like that, those things will come back to haunt you if we’re unable to string hits together and capitalize on mistakes the other team makes.”

As Kouns said, “We’re disappointed that we’re not playing in that final weekend but I’m not disappointed in the girls, it was a fine line between winning and losing on Saturday. We did some brilliant things, I’m proud of that, I’m thrilled with the buy-in and I’m so, so excited for what we can be next season.”