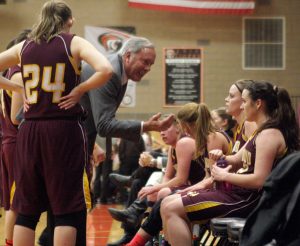 Berthoud girls’ head coach, Randy Earl, speaks to his team during a break in the game against Erie on Jan. 30.
Karen Fate / The Surveyor

The Berthoud High School (BHS) girls basketball team appears to be hitting its stride. And their timing could not be better as, following their 41-22 win over visiting Skyline Tuesday night, the Lady Spartans now sit in a three-way tie with Windsor and Mead for second place in the Tri-Valley Conference (TVC) with just five regular season games left on the schedule.

Berthoud had the hot-hand from the floor in its 19-point smack down of the Falcons on Tuesday night. The Lady Spartans shot an impressive 15-for-32 in the game’s first three quarters, building a 14-point lead along way. What made the feat all the more impressive was that most of Berthoud’s buckets were mid and even long-range jumpers, not lay-ups or close-range bank-shots.

“We always want to try to go inside, and we can usually go inside and at least draw some fouls,” Berthoud Head Coach Randy Earl said after the game. “But we weren’t getting anything inside and luckily the people on the perimeter hit some shots.”

Skyline center, five-foot, 11-inch Naomi Barron, who leads in the conference in rebounding and is second in blocks, made it difficult for Berthoud to get many good looks close to the basket. So the Lady Spartans adjusted, patiently running their offense until an open shot attempt presented itself. And, often those open shot attempts found the bottom of the net.

“(Barron) causes problems down low,” explained Earl. “She blocked some shots early and we had some trouble getting it inside so we moved the ball and we eventually got the shot we wanted most of the time.” Berthoud shot 44 percent from the floor, their second-best mark of the season.

The Lady Spartans took control of the game in the second period. Jumpers off the hands of Kristina Cavey, Maria Fate, Sarah Howard and Lindsay Erickson made up an 8-2 Berthoud scoring run that put the home team ahead 21-12 by the 2:12 mark.

If another 6-0 run in the third period, this time with buckets from Cavey, Howard and Taylor Armitage, pushing Berthoud’s lead to 31-16, did not sap whatever strength Skyline had remaining, the final play of the period had to.

With less than 10 seconds left in the period, Fate took the in-bounds pass only to be quickly trapped by a pair of Lady Falcons. Despite the trap, the junior forward was able to find and get the ball to Cavey just past the Skyline three-point line. Last season’s TVC Player of the Year took the ball down the floor, let the last few seconds tick off the clock, and then squared-up and drained a three-pointer as the buzzer sounded. The trey from Cavey, which marked the last three of her game-high 14 points, brought the Berthoud bench and hometown crowd to their feet as the Lady Spartans entered the final eight minutes of play leading 34-20.

“I think we went into it thinking that no matter how they play us we’re going to adjust to it. If they shut our posts down we were going to kick it to the guards and then when they started to shut the guards down we went back to the posts,” said junior Sydney Kouns, whose long-range jumper in the first period gave Berthoud a 9-8 lead, one they did not relinquish for the remainder of the game.

“We went back and forth and it was a nice balance,” Kouns added.

A pair of buckets from Howard and three from the charity stripe by Kouns was all Berthoud got in the fourth period, yet they did not even need that much as Skyline scored only one basket, with just 1:11 left on the clock, in the frame.

“I think everyone on the team has a role and my role is to hustle and do all the little things I can do to help out,” Kouns said, following her team’s third-straight win. “When we play as a team we can be unstoppable.”

Playing on Jan. 30 in Erie, the Lady Spartans completed their season sweep of the Lady Tigers with a 40-32 win. After building a 15-point halftime lead, 22-7, Erie clawed their way back by out-scoring Berthoud 13-5 in the third period and pulling to within single digits, 27-20. Yet the Lady Spartans responded to Erie’s rally with a 13-point fourth period to hold on for the win.

Cavey scored a game-high 22 points on the night, nine of which came from the foul line, while Howard added another seven. Cavey also grabbed 10 rebounds, second on the team to Fate’s 14.