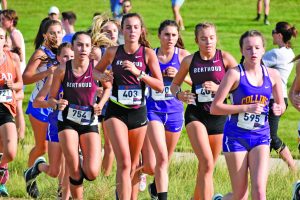 The nervous energy was thick under the Berthoud High School tent at Mehaffey Park on Friday, Aug. 16, for the first cross country meet of the season. Loveland High School (LHS) was hosting the Valley 5000 which would be a test of the summer training program for the teams attending. Berthoud’s coaches knew the team would be strong, but it was up to the athletes to prove they had put in the work for success.

The boys were the first to race. One of the largest teams on the course, the Spartans lined up three across with five rows of harriers behind them ready to take on the course. At the sound of the gun, the mass began trooping through the soaking wet grass, led by seniors Jonathan Wyrwas and Siler Stein.

“Patience,” was the reminder from the coaches. There was a long hill climb for the first half of the race. Too fast in the first mile would cause the second mile to hurt much worse. Spartan teammates and supporters were out on the course giving the athletes encouragement. About one-third of the team was not racing due to not meeting the required number of practices or other factors. Most of the racers were veterans with experience gutting out difficult conditions. The course was tough, hot and dry, making for slow finishing times, but the Spartans competed fiercely.

Wyrwas capitalized on his summer strength work by coming in 12th. The senior didn’t have to wait very long for his teammates to join him, as the top six Spartans were separated by a mere minute and 21 seconds. Only the winning team, Ft. Collins High School, had five finishers cross the line before BHS had seven. The strength of competition from within the Berthoud team will make the entire team faster. LHS placed second with 96 points to Berthoud’s 115. There were 12 teams in the race; including Tri-Valley competitors Roosevelt, Mead, and Windsor.

Sophomore Eli Greenslit and senior Stein finished in the same time for 21st and 22nd, as did another senior/sophomore combo, Sam Hatton and Lane Pirkey in 31st and 32nd. Crossing the finish line in 29th place, junior Kyle Conlon separated the pairs. Junior Brent Hoogland was the seventh and final varsity scorer in 34th place, displacing the other teams’ scorers, and sophomore Joe Malinowski was only four seconds behind in 37th place.

The girls were also missing teammates, but those who toed the line competed well. The first Lady Spartan across the line was freshman Ally Padilla in 23rd place. Junior Alex Schultz and sophomore Gigi Babyak came through in 28th and 29th places. Junior Julianne Evans Dennison was 43rd. Sophomore Gretchen Marty and freshmen Reese Densborn and Elliana von Seggern finished in 49th, 50th, and 61st places. Considering more than half of the girls were running their first high school meet, the team result of seventh place out of 12 teams is very encouraging.

School hadn’t started before this meet was held and the team is still adding new athletes to the roster. The next meet will be the Centaurus Invite at Waneka Lake on Sept. 1. This team is going to be exciting to watch.