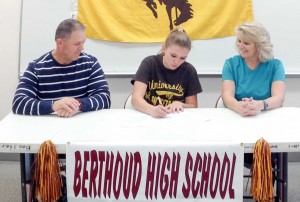 Berthoud High School’s Kiah Leonard, center, with her
mother, Kristi Leonard, right, and father, Dale Leonard, left,
signs her letter of intent to join the University of
Wyoming’s cross country team and attend as a student
next fall.
John Hall / The Surveyor

Berthoud High School senior track and cross country runner Kiah Leonard took one of the most important steps in her record-breaking, high school career on Nov. 17. Leonard, who owns four BHS records (1,600m, 3,200m, 5K and 4×800 relay), signed her letter of intent to take her long-distance running ability and extraordinary work ethic to the University of Wyoming.

“Ever since I was young I wanted to compete collegiately,” said Leonard. “Earning a scholarship to run at the University of Wyoming and getting to compete at a high level is awesome.

“I visited numerous schools, and after meeting the other runners and coaches at Wyoming I felt very comfortable. They were very inviting and made me feel at home.”

Leonard comes from a family who all love to compete. Her dad, Dale Leonard, tells a story about when the kids were very young he would set up little jumps and obstacles and the kids would race through their little mini-course.

Kristi Leonard, Kiah’s mom, is the BHS head cross-country coach, and has coached Kiah since sixth grade; she’s worked with Kiah all the way through high school.

“[Kiah] is looking forward to being a part of the Wyoming program,” said Kristi. “She chose Wyoming because of the level of competition. She wanted to go to a program that would push her to the next level. She is going to have to work really hard to just make the traveling squad, and she is looking forward to that challenge.”

For the Leonards, running, training, and working out is a family passion. Dale avidly trains and works out; Kristi runs as well as coaches; Julia Leonard (Kiah’s older sister) was an important part of the 2011 Lady Spartans state championship track team; and the youngest Leonard, Kade, 13, is headed to the AAU Cross Country Nationals in Lawrence, Kan. on Dec. 6.

Dale, beaming with pride at the signing, said “Kiah is the complete package − she’s a great student academically and has achieved quite a bit as an athlete as well. I’m glad she is going on to the next step of her life and fulfilling a dream of hers, and we are very happy she’ll be close to home.”

Watching Kiah train and how she conducts herself within the community, is an example of what hard work and determination can deliver. Arguably, she’s the most prolific, and possibly the best, long-distance runner in BHS history, but more importantly she has set a high standard both on and off the track that truly embodies Spartans Nation.